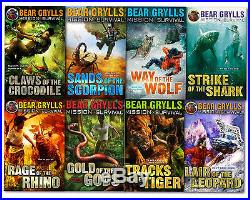 Bear Grylls Mission Survival Collection 8 Books Set. Claws of the Crocodile, Sands of the Scorpion, Gold of the Gods, Way of the Wolf, Strike of the Shark, Tracks of the Tiger, Lair of the Leopard, Rage of the Rhino. Mission Survival 1 Gold of the Gods. Mission: Survival Location: The Colombian Jungle Dangers: Snakes; starvation; howler monkeys Beck Granger is lost in the jungle with no food, no compass, and no hope of rescue. But Beck is no ordinary teenager - he's the world's youngest survival expert.

If anyone can make it out alive, he can. Mission Survival 2 Way of the Wolf Survival - Way of the Wolf. MISSION: SURVIVAL LOCATION: The Alaskan mountains DANGERS: Blizzards; grizzly bears; white-water rapids.

The worlds youngest survival expert is in trouble again. Beck Granger must find help across the mountains but even if he survives the deadly cold, can he escape the hungry wolf that is on his trail? The second book in an explosive adventure series from real-life survival expert BEAR GRYLLS Mission Survival 3: Sands of the Scorpion. Mission: Survival Location : The Sahara Desert Dangers : Diamond smugglers; heatstroke; scorpions After being forced to parachute out of a smugglers plane, teenage adventurer Beck Granger is about to face his toughest survival challenge yet the Sahara Desert. Blistering sun, shifting sand dunes, and no water for hundreds of miles.

Can he survive the heat and make it out alive? Mission Survival 4: Tracks of the Tiger. MISSION: Survival LOCATION: The Indonesian jungle DANGERS: Lava flows; fearsome tigers; orang-utans Young survival expert Beck Granger is supposed to be enjoying a holiday.

But when a volcano erupts he is stranded and must flee from red-hot lava and molten rocks crashing out of the sky. If he is to stay alive, he must make his way acrossthe jungle to safety travelling right through the heart of tiger territory.

The fourth book in an explosive adventure series from real-life survival expert BEAR GRYLLS. Mission Survival 5: Claws of the Crocodile: When Beck Granger follows a mysterious clue to the town of Broome in Northern Australia, it is just the beginning of an adventure that will force him into some of his toughest survival challenges yet! The search for clues takes Beck into the heart of the Outback, where he must battle raging storms, ravenous crocodiles, cunning villains and a secret that may link back to the death of his parents many years ago.

Mission Survival 6: Strike of the Shark. A gripping adventure story from Bear Grylls, packed with real survival details and dangers at every turn! But the sinking was no accident. In order to stay alive, hell have to work out who wants him dead, and why. That is, if the sharks dont get him first.

Mission Survival 7: Rage of the Rhino. Young adventurer Beck Granger is invited to South Africa by an old friend of his parents' to help out on a project to prevent rhino poaching. But when he arrives all is not as it seems, and Beck is caught up in something more dangerous than anything he's ever survived before.

Not only are there the poachers to contend with, but somebody seems desperate to track Beck down - whatever the cost. And then there are the hundreds of wild animals. Mission Survival 8: Lair of the Leopard.

When teen adventurer Beck Granger finds himself stranded on a Himalayan mountainside, he has to draw on all his strength and skill to survive. After death-defying climbing and sheltering in some of the hardest terrain on earth, Beck also has to somehow make it through bear attacks and flash floods. But the biggest challenge of all is still ahead Can Beck finally learn the truth about his parents deaths and bring their killers to justice?

We are dedicated to ensuring the highest possible quality service to our customers. You can send us a message by using the "Questions and answers" section towards the bottom of the page.

The item "Bear Grylls Mission Survival Collection 8 Books (Vol1-8) Set Childrens Gift Pack" is in sale since Thursday, October 15, 2015. This item is in the category "Books, Comics & Magazines\Fiction". The seller is "snazal-bargain" and is located in Leicester. This item can be shipped to North, South, or Latin America, all countries in Europe, all countries in continental Asia, Australia.