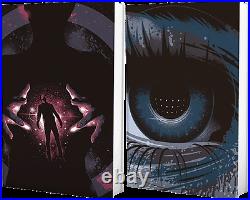 Two months have passed since a myriad of alien objects clenched about the Earth, screaming as they burned. The heavens have been silent, until a derelict space probe hears whispers from a distant comet. Something talks out there: but not to us. Who should we send to meet the alien, when the alien doesn't want to meet? Send a linguist with multiple-personality disorder and a biologist so spliced with machinery that he can't feel his own flesh. Send a pacifist warrior and a vampire recalled from the grave by the voodoo of paleogenetics.

Send a man with half his mind gone since childhood. Send them to the edge of the solar system, praying you can trust such freaks and monsters with the fate of a world. You fear they may be more alien than the thing they've been sent to find - but you'd give anything for that to be true, if you knew what was waiting for them... Prepare for a different kind of singularity in Peter Watts' Echopraxia, the follow-up to the Hugo-nominated novel Blindsight.

It's the eve of the twenty-second century: a world where the dearly departed send postcards back from Heaven and evangelicals make scientific breakthroughs by speaking in tongues; where genetically engineered vampires solve problems intractable to baseline humans and soldiers come with zombie switches that shut off self-awareness during combat. And it's all under surveillance by an alien presence that refuses to show itself.

Daniel Bruks is a living fossil: a field biologist in a world where biology has turned computational, a cat's-paw used by terrorists to kill thousands. Taking refuge in the Oregon desert, he's turned his back on a humanity that shatters into strange new subspecies with every heartbeat. But he awakens one night to find himself at the center of a storm that will turn all of history inside-out.

To his left is a grief-stricken soldier, obsessed by whispered messages from a dead son. To his right is a pilot who hasn't yet found the man she's sworn to kill on sight.

A vampire and its entourage of zombie bodyguards lurk in the shadows behind. And dead ahead, a handful of rapture-stricken monks takes them all to a meeting with something they will only call The Angels of the Asteroids.

The books are bound in full cloth with foil blocking in multiple colors, with handsome endsheets. The dustjackets are printed in four colors on top of a silver ink, creating an unusual look for the books.

Each book has multiple illustrations by Thomas Walker. I can provide additional pictures upon request testing out listing this through GoDaddy.

A word about the charity - The Foundation Fighting Blindness' mission is t. O drive the research that would lead to preventions, treatments, and vision restoration for the degenerative retinal diseases including macular degeneration (central vision loss), retinitis pigmentosa (cell loss in retinas), and Usher syndrome (leading cause of deaf/blindness) that together affect more than 10 million Americans and millions more throughout the world. The item "Blindsight and Echopraxia" is in sale since Friday, December 10, 2021.

This item is in the category "Books & Magazines\Books". The seller is "itsfiction" and is located in Peoria, Arizona. This item can be shipped worldwide.