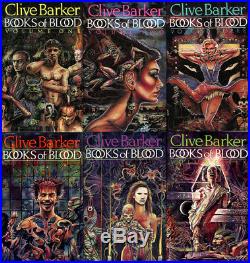 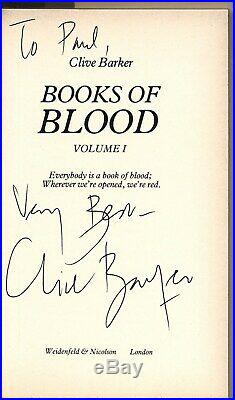 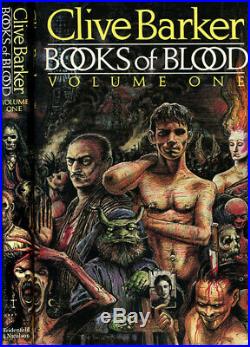 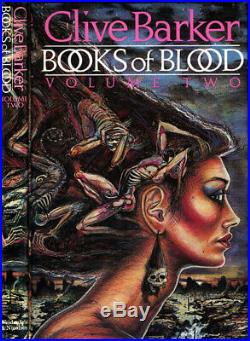 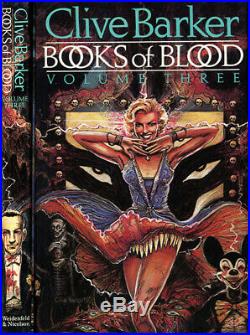 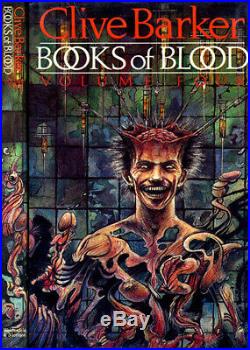 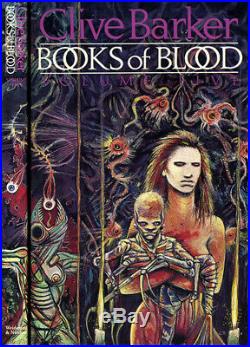 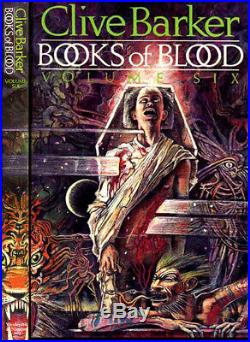 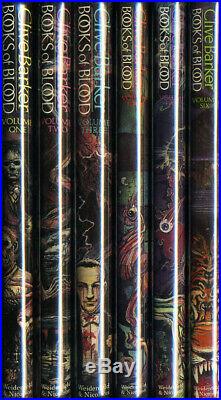 The complete definitive 6-volume hardcover set of Clive's series of horror stories and novelettes! All dust jacket cover art by Clive! NOT book clubs, NOT x-libs.

Books of Blood by Clive Barker author of The Hell-Bound Heart (aka Hellraiser), Cabal (aka Nightbreed), Imagica, Weaveworld, Abarat Six volumes with dust jacket illustrations by Barker, still the best cover art for this set! First Hardcover 6-Volume Set - First Printings Weidenfeld & Nicolson UK 1985-86. Includes many of Clive's most popular stories, particularly "The Midnight Meat Train", "In the Hills the Cities" (which won the British Fantasy Award for short fiction), "Hell's Event", "Jacqueline Ess: Her Will and Testament" (nominated World Fantasy Award), "Rawhead Rex", "The Inhuman Condition", "In the Flesh", and "The Last Illusion". The first three volumes won the World Fantasy Award for Best Collection in 1985 and volumes 4-6 were nominated in 1986. SIGNED and inscribed on each volume "To Paul Best Wishes Clive Barker".

Only shortcoming is the typical age-toning to the text-block i. The pages which is common with UK popular hardcover editions produced circa 1980 to 2000. NOTE on Editions of the Books of Blood by Clive Barker. The edition history of Clive Barker's Books of Blood is no less than a bibliographic nightmare, almost a horror story in and of itself!

The very first appearance of these books were mass market paperbacks published by Sphere UK in 1984. Reportedly, they had been submitted to an editor at Gollancz who said something to the effect of Get these disgusting things off my desk! Barker and his agent went to Sphere. Shortly thereafter this 6-volume hardcover set was published in the UK by Weidenfeld & Nicolson, the same publishers as Barker's first novel "The Damnation Game". The US publishers for Barker, Putnam/Poseidon, felt the covers by Clive were too gruesome for US readers (they obviously didn't understand the sensibilities of typical Barker fans on this side of the pond).

Consequently, Putnam US published the first three books in a single volume with less than intriguing cover art, volume four as "The Inhuman Condition" (with silly art featuring hands), volume five as "In the Flesh" (slightly better dj art but still not nearly as good as Clive's), and then they combined the stories of book six with Barker's novel "Cabal". Near the same time, Scream Press published the entire set in a signed-limited edition, but in 4 volumes, all with slipcases. The first three were combined, and the last three were individual volumes. A set I've never cared to own.

Finally in 2014, Subterranean Press issued the entire set with the original covers by Clive Barker in a large slipcase, essentially the first appearance of the work with Clive's artwork issued by a US publisher. The only difference is the left-hand edge of the artwork appears on the front whereas they appear on the spines in the original set. Still I regard this UK set as the most desirable of all the hardcover editions.

NOTE: All modern books with dust jackets come with dust jacket covers. ALSO: The picture is of the actual items for sale. The pictures are NOT a stock photo. NOTE on FEEDBACK: If you have problem with an order for any reason, please contact me before leaving feedback! 99% of the time we can resolve the problem. It is much more difficult to change feedback once left. A Word on First Editions : 95% of my offerings are trade editions, and 90% of those are first printings.

In general I do NOT sell bookclub editions or cheap reprints like Modern Library except in rare instances which would be explicitly stated as such. In general, I also DO NOT sell x-library copies. If the book is both a first edition AND a first printing , it will be marked as first edition in the Item Specifics under.