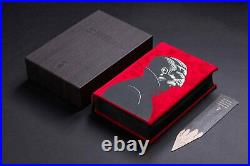 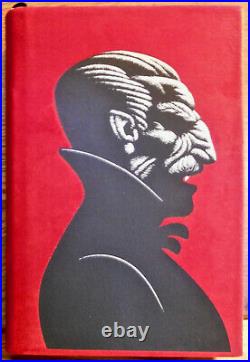 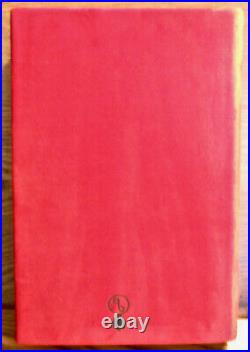 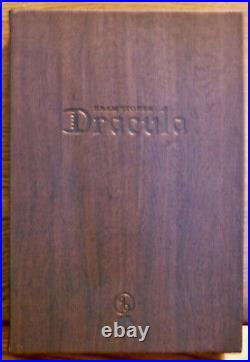 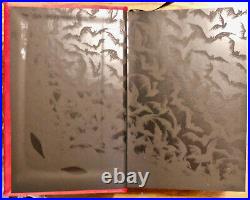 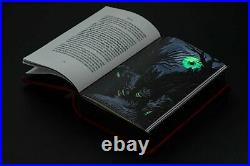 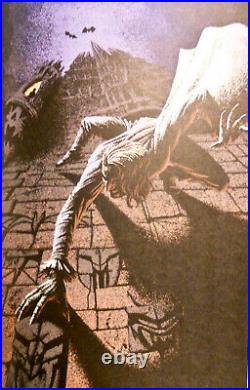 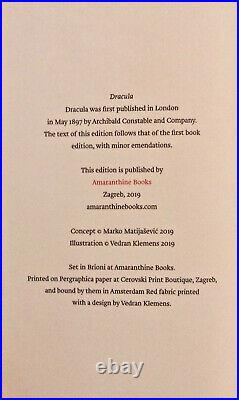 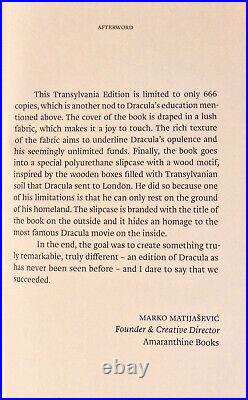 Zagreb, Yugoslavia: Amaranthine Books, 2020. 1st edition of what the publisher is calling the Transylvania Edition of DRACULA, named after Draculas domain. Limited to 666 numbered (but not signed) copies. This is clearly a special edition of DRACULA. The reason that 666 copies were published (according to Amaranthine Books) is that it is mentioned in the text that Dracula (the character) was a student of the devil.

The book is made out of some special materials, including the accompanying slipcase and the accompanying book mark. More information about the making and presentation of the book is noted below. This is NOT a book club book. This is NOT an ex-library book. SCROLL DOWN THIS PAGE IMMEDIATELY TO SEE THE CONDITION OF THIS BOOK AND THIS SLIPCASE (AND BOOK MARK).

Bram Stoker was born in 1847 in Dublin, Ireland. His parents were Abraham Stoker and Charlotte Mathilda Blake Thornley. He was the third of seven children. Bram Stoker was bedridden with an unknown illness until he started school at the age of seven, when he made a complete recovery.

In fact, Stoker became an excellent athlete (he was named University Athlete, participating in multiple sports) at Trinity College. He graduated from Trinity with a B.

In 1870 and pursued his M. He was auditor of the College Historical Society and president of the University Philosophical Society, where his first paper (in retrospect, very fittingly) was on Sensationalism in Fiction and Society. Stoker became interested in the theatre while a student through his friend Dr. During that time he gave Henry Irvings Hamlet at the Theatre Royal in Dublin a favorable review. Irving invited Stoker for dinner at the Shelbourne Hotel where he was staying and they became friends.

In 1878 Stoker married Florence Balcombe. She was a celebrated woman in terms of her beauty and one of her former suitors was Oscar Wilde. The Stokers moved to London, where Stoker became acting manager and then business manager of Irvings Lyceum Theatre, a post he held for 27 years. The collaboration with Henry Irving was important for Stoker and through him he became involved in London's high society, where he met James Abbott McNeill Whistler and Sir Arthur Conan Doyle (to whom he was distantly related). Working for Irving, the most famous actor of his time, and managing one of the most successful theatres in London made Stoker a notable if busy man.

He was dedicated to Irving and his memoirs show he idolised him. In London, Stoker also met Hall Caine, who became one of his closest friends he dedicated DRACULA to him. Stoker ended up traveling the world, including the United States.

He was invited twice to the White House where he met both William McKinley and Theodore Roosevelt. Stoker was also able to meet one of the literary idols, Walt Whitman.

Stoker never did visit Eastern Europe, one of the settings for his most famous novel, DRACULA. Stoker visited the English coastal town of Whitby in 1890, and that visit was said to be part of the inspiration for DRACULA. Before writing DRACULA, Stoker met Armin Vambery, a Hungarian-Jewish writer and traveller who was born in what was then called the Kingdom of Hungary (now Slovakia). DRACULA likely emerged from Vamberys dark stories of the Carpathian mountains. Stoker then spent several years researching Central and East European folklore and mythological stories of vampires. Although it is said that Stokers DRACULA was based on the history of Vlad III (Vlad Tepes), it is most likely that Stoker borrowed the name and scraps of miscellaneous information about Romanian history. After suffering a number of strokes in 1910, 1911, and 1912, Stoker died in London in April of 1912. Stoker was the author of such great and famous books as THE SNAKES PASS, THE WATTERS MOU, THE SHOULDER OF SHASTA, DRACULA (offered here), THE MYSTERY OF THE SEA, THE JEWEL OF SEVEN STARSA, THE LADY OF THE SHROUD, THE LAIR OF THE WHITE WORM, and several others.

DRACULA, was, of course, the 1897 novel that introduced the character of Count Dracula and established many conventions of subsequent vampire fantasy. The novel tells the story of Draculas attempt to move from Transylvania to England so that he could find new blood and spread the undead curse, which led to the battle between Dracula and a small group of people led by Professor Abraham Van Helsing. The Dracula character has gone on to appear in probably as many literary genres and outlets such as vampire literature, horror fiction, fantasy fiction, theater versions, film version, and television versions and continues to be one of the most famous characters in all of literature. The story told in DRACULA is in epistolary format as a series of letters, diary entries, newspaper articles, and ships log entries.

Jonathan Harker, an English solicitor, visits Count Dracula at his castle in the Carpathian Mountains near Transylvania. Harker soon realizes that he is Draculas prisoner and Harker barely escapes with his life. An animal resembling a large dog is seen leaping ashore. Harkers fiancee, Mina Murrary is holidaying with her friend Lucy Westenra. Dracula is shown to be stalking Lucy. He has also made contact with Dr. John Seward, a suitor of Lucys, who has a patient named Renfield, an insane man who wishes to consume insects, spiders, birds, and rats to absorb their life force. He is also, apparently, able to detect Draculas presence.

As time passes, Lucy begins to become ill, which includes sleepwalking and dementia. Seward invites his old teacher, Abraham Van Helsing, who immediately determines the true cause of Lucys condition.

She has suffered extreme blood loss and Van Helsing prescribes multiple blood transfusions. Despite the transfusions and Van Helsings placing of garlic around Lucys room and around her neck, she continues to waste away. Newspapers report that children are being stalked by a beautiful woman, whom Van Helsing knows is Lucy, who has become a vampire. Seward and his fellow suitors of Lucy, Quincey Morris and Arthur Holmwood, as well as the rest of Van Helsings group team up to find Lucy. They find Lucy, stake her heart, behead her, and fill her mouth with garlic. Van Helsing and the others conduct research in order to find and kill Dracula. Dracula responds by attacking Mina and feeding her his own blood in order to control her. The group is able to find a number of Draculas boxes of earth and to destroy them.

Dracula finally escapes with one of his boxes back to Transylvania. They pursue Dracula in order to find and destroy him. In a pitched battle, Harker shears Dracula through the throat with a kukri knife and Quincey stabs the Count through the heart with a Bowie knife. Dracula crumbles to dust, and Mina is freed from her curse of vampirism. DRACULA was first published in London in May of 1897 by Archibald and Company.

Edition was published by Doubleday and McClure in 1899. Amazingly, due to some mistakes in complying with U. The copy of DRACULA offered here is a 2020 publication by Amaranthine Books of Zagreb, Yugoslavia. It is a limited edition of only 666 copies. The 666 copies being published was intentional on the part of the publisher because they note that Dracula was a student of the devil himself.

From the publishers own description. The Transylvania Edition of DRACULA, named after his domain, aims to offer a new reading experience of this famous novel. The number of copies 666 numbered editions was inspired by the point in the story where it is mentioned that Dracula was a student of the devil himself in the great underground halls of Scholomance. The book comes in a special slipcase with a wood motif, hiding one of the design Easter Eggs. The title of the book is pressed in the material, making it elegant and non-intrusive.

Once you have the book in your hands, you are met with covers draped in red, richly textured fabric that is a joy to touch which aims to underline Draculas opulence, his seemingly unlimited funds. It is a common misconception that Dracula was killed by the sunlight, but that couldnt be farther from the truth he is merely sensitive to it, it makes him weaker. Therefore, we decided to make our book sensitive to light as well, so the cover features Draculas portrait that absorbs the light and then glows in the dark. When you open the book youll be greeted by beautiful black, bat-themed endpapers.

The page edges were painted in black, but in a way that it would interact with the capillarity of the paper, making the paint flutter on the edge of each page differently, like some kind of darkness is seething into the book. Occasionally, we even let a few tiny droplets escape on the margins, just to emphasise the effect. Once you reach the end, you should notice another design Easter Egg and you can read the Afterword which explains the thought process and the creative concept behind this edition. Also, with each book comes a bookmark in the shape of a wooden stake, a precautionary method that ensures that you and Dracula remain on the same page, so to speak. There is total of sixteen illustrations in the book and, just like Dracula, they are sensitive to the light.

It is a common misconception that Dracula is killed by sunlight, but in fact it merely weakens him. Thus, we wanted to make a book that will react to light in some way.

This is achieved with use of phosphorescent ink which absorbs bright light and emits it in dark, even in low ambient light. Each illustration represents an important event in the book.

Ex-library books must be noted as such since generally they are of little value to the collector of 1st editions. Condition is also very important to those collectors. Books and dust jackets must be described in detail. Mistakes can be made (and corrected), of course, but if you DON'T KNOW, don't try to sell a book as a 1st edition.

Furthermore, however, for certain scarce books in great condition, I do expect to get close to what they're worth. Stay with me; I always have a number of important, collectible, cornerstone science fiction, fantasy, and horror 1st editions listed. All items are being offered for sale elsewhere; I reserve the right to end this listing early if this item sells elsewhere. I would like to round out this set by acquiring the #2/500 copy of ANCILLARY SWORD. Buyers who wish to have packages sent to addresses outside of the U.

I specialize in science fiction, fantasy, and horror 1st editions: award winners, cornerstone books, and generally recognized important books in the genre(s). I GUARANTEE THE CONDITION OF THIS BOOK; IF YOU DON'T LIKE IT, SEND IT BACK! I stand behind all of my items FULLY. OTIUM SINE LITTERIS MORS EST ET HOMINIS VIVI SEPULTURA. Limited Edition" is in sale since Monday, May 25, 2020.

This item is in the category "Books\Fiction & Literature". The seller is "dna-books" and is located in Lincoln, Nebraska. This item can be shipped worldwide.