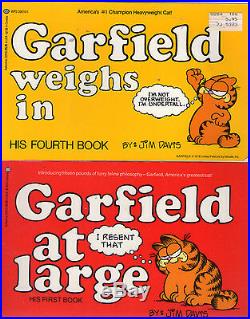 You will get one set of 30 titles, the first 30 in the Garfield Comic Strip books by Jim Davis, as listed below. Size of book and cover art may vary. Please let us know if you have any questions. Garfield At Large: His First Book.

Garfield Rolls On: His 11th Book. Garfield Out to Lunch: His 12th Book.

Note: Many of the above books were printed in 2-in-1 or 3-in-1 omnibus editions. If we have any of those in stock we will send those instead of the individual titles.