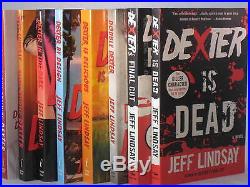 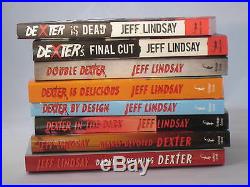 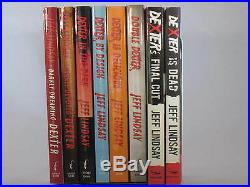 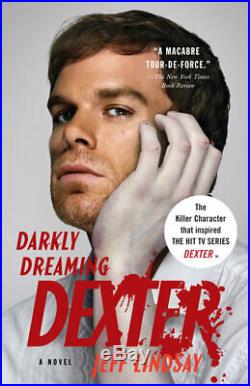 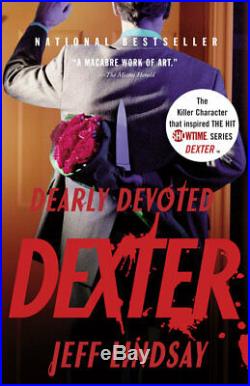 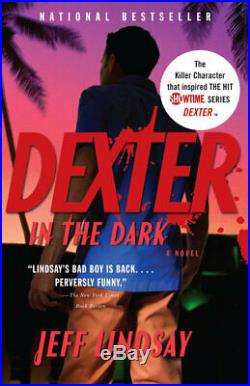 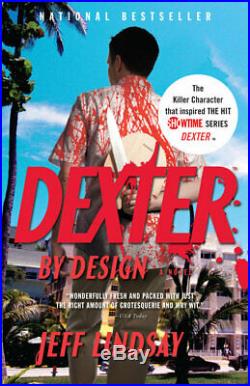 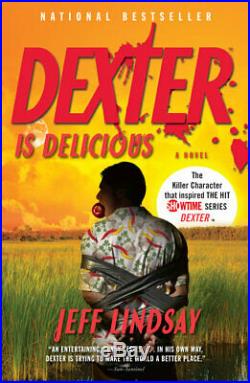 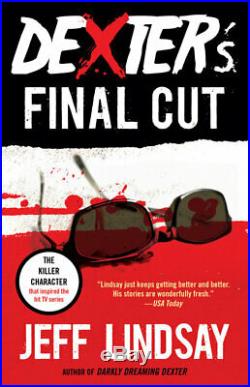 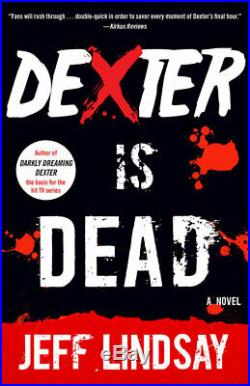 Dexter Novels by Jeff Lindsay (Books 1-8 in the Series, Trade Paperback). This 8-book set of trade paperback novels includes the below titles. Darkly Dreaming Dexter (9780307277886): Meet Dexter Morgan, a polite wolf in sheeps clothing. Hes handsome and charming, but something in his past has made him abide by a different set of rules. Hes a serial killer whose one golden rule makes him immensely likeable: he only kills bad people.

And his job as a blood splatter expert for the Miami police department puts him in the perfect position to identify his victims. But when a series of brutal murders bearing a striking similarity to his own style start turning up, Dexter is caught between being flattered and being frightenedof himself or some other fiend. Dearly Devoted Dexter (ISBN 9781400095926): Lifes tough for Dexter Morgan. Its not easy being the worlds only serial killer with a conscience, especially when you work for the Miami police.

To avoid suspicion, Dexters had to slip deep into his disguise: spending time with his girlfriend and her kids, slowly becoming the worlds first serial killing couch potato. Then a particularly nasty psychopath starts cutting a trail through Miami a killer whose twisted techniques leave even Dexter speechless. When his sister Deborah, a tough-as-nails cop, is drawn into the case, it becomes clear that Dexter will have to do come out of hiding and hunt the monster down.

Unless, of course, the killer finds him first. Dexter in the Dark (ISBN 9780307276735): In his work as a Miami crime scene investigator, Dexter Morgan is accustomed to seeing evil deeds.

Particularly because, on occasion, he commits them himself. But Dexter's happy existence is turned upside down when he is called to an unusually disturbing crime scene at the university campus.

Dexter's Dark Passenger mastermind of his homicidal prowess immediately senses something chillingly recognizable and goes into hiding. Dexter is alone for the first time in his life, and he realizes he's being hunted by a truly sinister adversary. Meanwhile he's planning a wedding and trying to learn how to be a stepfather to his fiancé's two kids who might just have dark tendencies themselves. Macabre, ironic, and wonderfully entertaining, Dexter in the Dark goes deeper into the psyche of one of the freshest protagonists in recent fiction.

Dexter by Design (ISBN 9780307276742): After his surprisingly glorious honeymoon in Paris, life is almost normal for Dexter Morgan. Married life seems to agree with him: hes devoted to his bride, his stomach is full, and his homicidal hobbies are nicely under control.

But old habits die hardand Dexters work as a blood spatter analyst never fails to offer new temptations that appeal to his offbeat sense of justice. Not to mention that his Dark Passenger still waits to hunt with him in the moonlight.

The discovery of a corpse (artfully displayed as a sunbather relaxing on a Miami beach chair) naturally piques Dexters curiosity and Miamis finest realize theyve got a terrifying new serial killer on the loose. And Dexter, of course, is back in business. Dexter is Delicious (ISBN 9780307474926): Dexter Morgans neatly organized life as a blood spatter analyst for the Miami Police, devoted husband and father, and killer of only those who deserve it is turned upside down by the arrival of his new daughter, Lily Anne. Feeling surprisingly sunny and loving, hes trying to suppress the influence of his Dark Passengerthe voice inside who guides his homicidal urges. But Dexter is summoned to investigate the disappearance of a seventeen-year-old girl who has been running with a bizarre group of goths who fancy themselves to be vampires.

As Dexter gets closer to the truth of what happened to the missing girl, he realizes they are not really vampires, but cannibals. And most disturbing, these people have their eyes on Dexter. And their mouths are watering. Double Dexter (ISBN 9780307474933): Dexter is displeased. Like any self-respecting, totally decent, soundly homicidal guy, Dexter Morgan takes great pride in his work and is careful to remain anonymous. So he is, naturally, upset to discover that someone has identified him andworst of allis now turning his own methods against him. The situation soon becomes more complicated when a brutal cop-killer begins targeting Miamis police detectivesleaving behind bodies that are battered beyond recognitionand stoking the departments worst fears. As his colleagues grow more paranoid of the psychotic killer in their midst, Dexters position is increasingly perilous. He is running out of time to track down this copycat and deliver his usual special justice, before his dark hobby is revealed to the world.

Dexter's Final Cut (ISBN 9780345802583): Mega-star Robert Chase is famous for losing himself in his characters. When he and a group of actors descend on the Miami Police Department for "research, " Chase becomes fixated on Dexter Morgan, the blood spatter analyst with a sweet tooth and seemingly average life.

Chase shadows Dexter's every move, trying to learn what makes him tick. However, Dexter's favorite pastime of hunting down the worst killers who've escaped legal prosecution--and introducing them to his special brand of justice--presents, well, a bit of a problem. It's a secret best kept out of the spotlight if Dexter wants to stay out of the electric chair, but even Dexter isn't immune to the call of fame.

Dexter is Dead (ISBN 9780345802590): Dexter Morganblood-spatter analyst. Serial killerknew that he couldnt burn the candle at both ends forever, and now, his dark deeds have finally ensnared him. He is in prison on multiple homicide charges, although, ironically, he did not commit any of the murders of which he is accused.

Hes lost everything: his wife, kids, career, and the loyalty of his sister. Now his sole, small shot at redemption may come from his brother, Brian, a homicidal maniac who makes Dexter look like the angel in the family. By helping Brian through some serious trouble of his own making, Dexter sees a potential path to proving himself innocent. But the stakes are truly deadly.