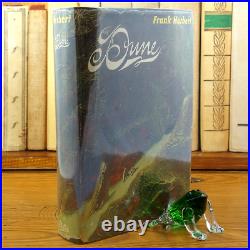 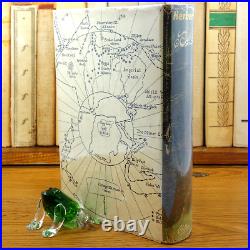 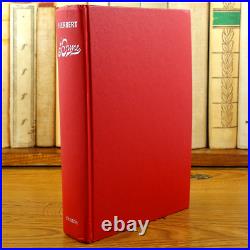 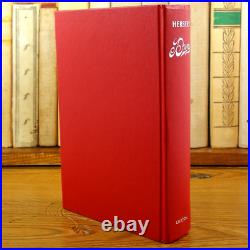 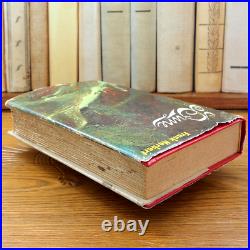 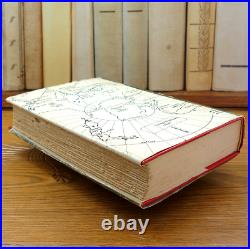 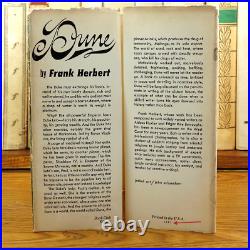 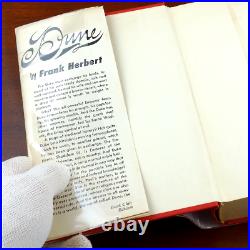 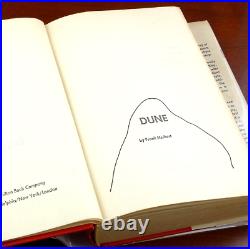 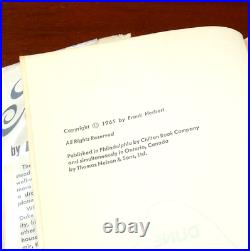 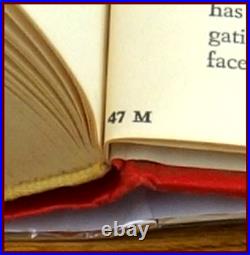 This is a 1st American Book Club edition, 1st printing of the work published by Chilton Book Company in 1965. As per A Collector's Guide to Dune, pg. 3, the established 1st edition/1st printing points for the Book Club edition are: "1681" bottom back flap of DJ and gutter code "47M" bottom of author's page. The original dust jacket is protected from further wear by a Mylar sleeve. Dune is a 1965 science-fiction novel by American author Frank Herbert, originally published as two separate serials in Analog magazine. It tied with Roger Zelazny's This Immortal for the Hugo Award in 1966, [2] and it won the inaugural Nebula Award for Best Novel. Dune is set in the distant future amidst a feudal interstellar society in which various noble houses control planetary fiefs. It tells the story of young Paul Atreides, whose family accepts the stewardship of the planet Arrakis. While the planet is an inhospitable and sparsely populated desert wasteland, it is the only source of melange, or "the spice, " a drug that extends life and enhances mental abilities.

Melange is also necessary for space navigation, which requires a kind of multidimensional awareness and foresight that only the drug provides. [6] As melange can only be produced on Arrakis, control of the planet is thus a coveted and dangerous undertaking. The story explores the multi-layered interactions of politics, religion, ecology, technology, and human emotion, as the factions of the empire confront each other in a struggle for the control of Arrakis and its spice.

Herbert wrote five sequels: Dune Messiah, Children of Dune, God Emperor of Dune, Heretics of Dune, and Chapterhouse: Dune. Adapted into the 2000 Sci-Fi Channel miniseries Frank Herbert's Dune and its 2003 sequel Frank Herbert's Children of Dune (which combines the events of Dune Messiah and Children of Dune), a series of computer games, a board game, songs, and a series of follow-ups, including prequels and sequels, that were co-written by Kevin J. Anderson and the author's son, Brian Herbert, starting in 1999. Since 2009, the names of planets from the Dune novels have been adopted for the real-life nomenclature of plains and other features on Saturn's moon Titan. The above text was taken from Wikipedia.