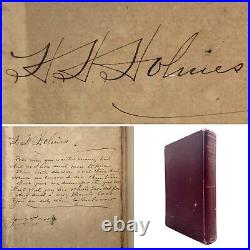 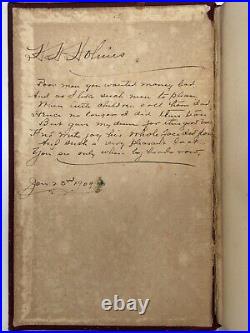 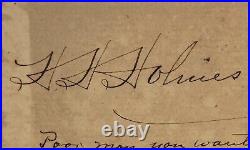 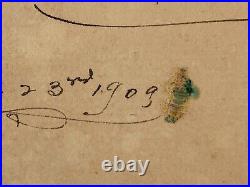 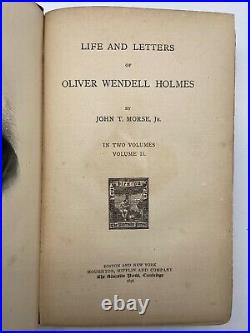 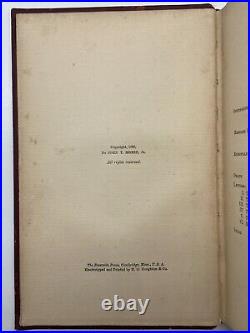 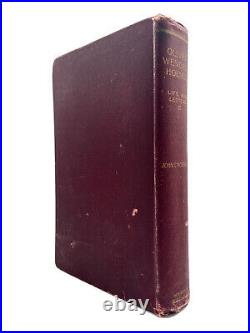 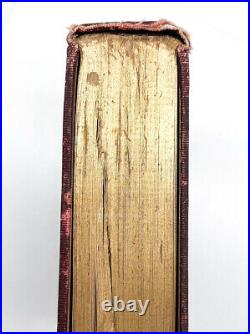 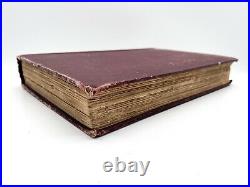 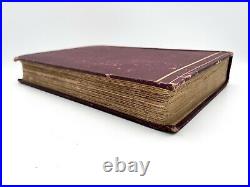 HOLMES BOOK POSSESSED DURING HIS INCARCERATION IN MOYAMENSING PRISON BEFORE HIS 1896 EXECUTION. Oliver Wendell Holmes Life and Letters Vol. Octavo, full bound maroon cloth with gilt stamped title to spine. First Edition of Oliver Wendell Holmes Life and Letters, SIGNED BY Herman Webster Mudgett H. Holmes while incarcerated awaiting his May 7, 1896 execution at Moyamensing Prison. Signature in the customary ownership location on the top fore-edge of the front pastedown.

Holmes was best known as Dr. Below Holmes' SIGNATURE, the page contains a contemporary poem with text strongly suggesting authorship by his son.

It's dated January 3rd, 1909 and has a very peculiar insect that looks to have been internally squashed immediately to the right of the date. The poem appears to read. And as I like such men to please. When a little children called them dad.

As if such a very pleasant look. You see only when _____ ______ grow. Holmes was the first American serial killer and believed by many to be Jack the Ripper.

Through he confessed to confessed to 27 murders, he was convicted and sentenced to death for only one murder, that of accomplice and business partner Benjamin Pitezel. Despite his confession of 27 murders after the Pitezel trial awaiting execution, it is speculated that Holmes may have killed as many as 200 people. Victims were killed in a mixed-use building which he owned in Chicago, located about 3 miles (5 km) west of the 1893 World's Fair: Columbian Exposition, supposedly called the World's Fair Hotel (informally called "The Murder Castle"), though evidence suggests the hotel portion was never truly open for business. Besides being a serial killer, Holmes was also a con artist and a trigamist, the subject of more than 50 lawsuits in Chicago alone. Holmes was executed on May 7, 1896, nine days before his 35th birthday.

Holme's case was notorious in its time and received wide publicity in the international press. His story had been chronicled in The Torture Doctor by David Franke (1975), The Scarlet Mansion by Allan W. Eckert (1985) and Depraved: The Shocking True Story of America's First Serial Killer by Harold Schechter (1994), as well as "The Monster of Sixty-Third Street" chapter in Gem of the Prairie: An Informal History of the Chicago Underworld by Herbert Asbury (1940, republished 1986). In 2017, The History Channel further popularized Holmes when it aired an eight episode limited docuseries entitled American Ripper, in which Holmes' great great-grandson Jeff Mudgett, along with former CIA analyst Amaryllis Fox, investigated clues to prove that Holmes was also the infamous London serial killer, Jack the Ripper.

As of 2019, an adaptation of The Devil in the White City with Martin Scorsese and Leonardo DiCaprio attached as executive producers is in development with Paramount TV and Hulu. Though it was initially reported in 2015 to be a feature film starring DiCaprio, once Hulu agreed to a partnership with Paramount, the project was announced as a series with no confirmation as to whether Scorsese and DiCaprio would actually direct and star in it, respectively. The project was delaye by COVID and it's status is not currently known.

Light spotted lightening to boards and spine. Moderate edge wear more significant at head and foot of spine. About one quarter inch closed tear at bottom left of rear board. Clean text blocks with some scratches.

Internally clean but for the writing of interest. Front endpaper removed and first free pages missing. Holmes by Herman Webster Mudgett while incarcerated awaiting his May 7, 1896 execution at Moyamensing Prison.

It's dated January 23rd, 1909 and has a very peculiar insect that looks to have been intentionally squashed immediately to the right of the date. Holmes SIGNED BOOK FROM PRISON Jack the Ripper Herman Webster MUDGETT" is in sale since Saturday, January 16, 2021. This item is in the category "Books\Antiquarian & Collectible". The seller is "labb1279" and is located in Baton Rouge, Louisiana.