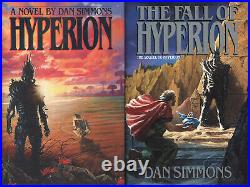 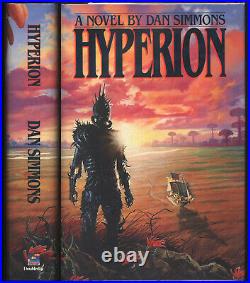 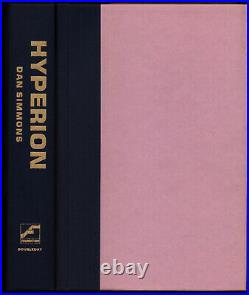 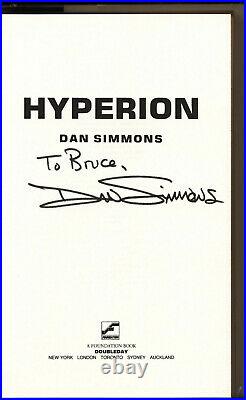 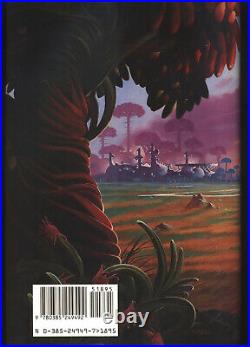 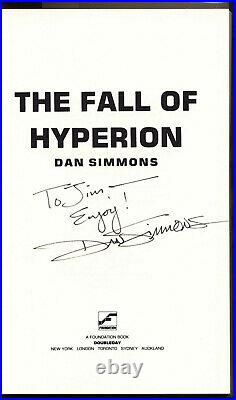 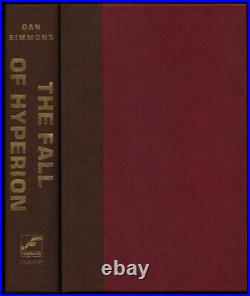 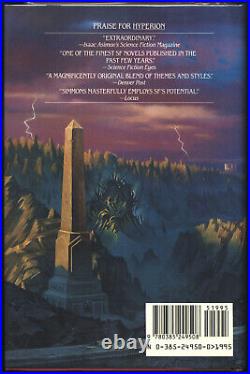 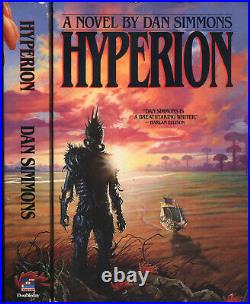 Only 2000 copies issued in hardcover, and becoming much less available than even a few years ago. SIGNED and inscribed "to Bruce" by Simmons boldly on the title page. Winner of the Hugo Award and Locus Award for Best Novel.

Near Fine+ in Fine- Dust Jacket. Outwardly a nice pleasing copy, the main shortcoming is some light foxing most prominent on the right-hand edge of the text block i. The page edges with a hint at the upper text-block and almost non-existent at the lower text block.

Tiny hint of waviness to the jacket almost imperceptible. The Fall of Hyperion by Dan Simmons Hardcover First Edition - First Printing Doubleday 1990. Includes errata sheet to "fix" the printing error in which page 306 was printed twice and page 305 was omitted. Reportedly only 4000 copies issued in trade hardcover first printing copies. SIGNED and inscribed "to Jim" by Simmons boldly on the title page.

Edition note: Hyperion was Simmons' third novel after Carrion Comfort and Song of Kali, his first published book. Reportedly only 2000 copies were issued in trade hardcover, many copies going to libraries, the balance issued in trade paperbacks. Doubleday may have feared that such an esoteric and literally science fiction novel would not appeal to average readers. Early on, Simmons had bad luck getting published. Apparently, one of his short stories was accepted and then the magazine went defunct before it was published. Song of Kali was accepted by another publisher which went defunct before it was published. Bluejay published Song of Kali finally but it went defunct shortly thereafter. Shortly thereafter, Simmons published the Hyperion/Fall of Hyperion duology which is in my opinion one of the best science fiction novels up there with Dune by Herbert. The structure of Hyperion is loosely based on Geoffrey Chaucer's The Canterbury Tales.

The pictures are NOT stock photos. NOTE on FEEDBACK: If you have problem with an order for any reason, please contact me before leaving feedback!

99% of the time we can resolve the problem. It is much more difficult to change feedback once left. A Word on First Editions : 95% of my offerings are trade editions, and 90% of those are first printings. In general I do NOT sell bookclub editions or cheap reprints like Modern Library except in rare instances which would be explicitly stated as such.

In general, I also DO NOT sell x-library copies. If the book is both a first edition AND a first printing , it will be marked as first edition in the Item Specifics under. Otherwise assume a later printing or a later edition. They typically take 1 1/2 to 3 weeks.

It is best to find out your country's policies in this regard. I try my very best to accurately describe condition. The item "Hyperion & The Fall of Hyperion Dan Simmons HC 1sts 1989/1990 Signed + free book" is in sale since Tuesday, October 27, 2020.

This item is in the category "Books\Fiction & Literature". The seller is "tristanbooks" and is located in Oakland, California. This item can be shipped worldwide.