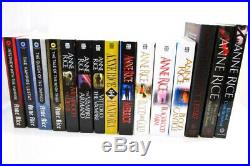 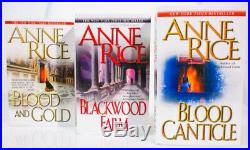 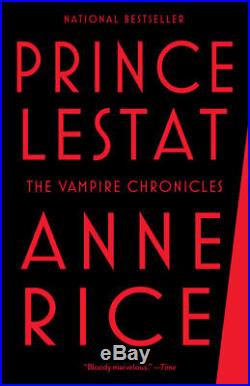 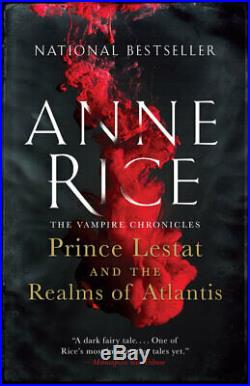 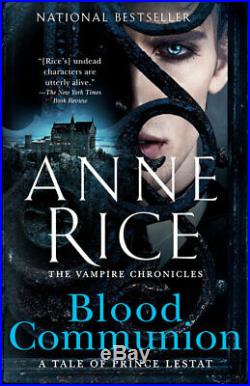 It is a novel only Anne Rice could write. The Vampire Lestat (ISBN 9780345313867): Lestat. The vampire hero of Anne Rices enthralling novel is a creature of the darkest and richest imagination. Once an aristocrat in the heady days of pre-revolutionary France, now a rock star in the demonic, shimmering 1980s, he rushes through the centuries in search of others like him, seeking answers to the mystery of his eternal, terrifying exsitence. His is a mesmerizing storypassionate, complex, and thrilling.

The Tale of the Body Thief (ISBN 9780345384751): In a gripping feat of storytelling, Anne Rice continues the extraordinary Vampire Chronicles that began with the now-classic Interview with the Vampire. For centuries, Lestatvampire-hero, enchanter, seducer of mortalshas been a courted prince in the dark and flourishing universe of the living dead. And in his overwhelming need to destroy his doubts and his loneliness, Lestat embarks on the most dangerous enterprise he has undertaken in all the years of his haunted existence. Memnoch the Devil (ISBN 9780345409676): STARTLING. MEMNOCH'S TALE IS COMPELLING.

Like Interview with the Vampire, Memnoch has a half-maddened, fever-pitch intensity. Narrated by Rice's most cherished character, the vampire Lestat, Memnoch tells a tale as old as Scripture's legends and as modern as today's religious strife. Rice has penned an ambitious close to this long-running series. Fans will no doubt devour this. -The Washington Post Book World.

MEMNOCH THE DEVIL OFFERS PASSAGES OF POETIC BRILLIANCE. [MEMNOCH] is one of Rice's most intriguing and sympathetic characters to date. Rice ups the ante, taking Lestat where few writers have ventured: into heaven and hell itself. She carries it off in top form.

The Vampire Armand (ISBN 9780345434807): In the latest installment of The Vampire Chronicles, Anne Rice summons up dazzling worlds to bring us the story of Armand - eternally young, with the face of a Botticelli angel. Armand, who first appeared in all his dark glory more than twenty years ago in the now-classic Interview with the Vampire , the first of The Vampire Chronicles, the novel that established its author worldwide as a magnificent storyteller and creator of magical realms. Now, we go with Armand across the centuries to the Kiev Rus of his boyhood - a ruined city under Mongol dominion - and to ancient Constantinople, where Tartar raiders sell him into slavery. And in a magnificent palazzo in the Venice of the Renaissance we see him emotionally and intellectually in thrall to the great vampire Marius, who masquerades among humankind as a mysterious, reclusive painter and who will bestow upon Armand the gift of vampiric blood. As the novel races to its climax, moving through scenes of luxury and elegance, of ambush, fire, and devil worship to nineteenth-century Paris and today's New Orleans, we see its eternally vulnerable and romantic hero forced to choose between his twilight immortality and the salvation of his immortal soul. Pandora (ISBN 9780345422385): Anne Rice, creator of the Vampire Lestat, the Mayfair witches and the amazing worlds they inhabit, now gives us the first in a new series of novels linked together by the fledgling vampire David Talbot, who has set out to become a chronicler of his fellow Undead. The novel opens in present-day Paris in a crowded café, where David meets Pandora.

She is two thousand years old, a Child of the Millennia, the first vampire ever made by the great Marius. David persuades her to tell the story of her life. Pandora begins, reluctantly at first and then with increasing passion, to recount her mesmerizing tale, which takes us through the ages, from Imperial Rome to eighteenth-century France to twentieth-century Paris and New Orleans. She carries us back to her mortal girlhood in the world of Caesar Augustus, a world chronicled by Ovid and Petronius.

This is where Pandora meets and falls in love with the handsome, charismatic, lighthearted, still-mortal Marius. This is the Rome she is forced to flee in fear of assassination by conspirators plotting to take over the city. And we follow her to the exotic port of Antioch, where she is destined to be reunited with Marius, now immortal and haunted by his vampire nature, who will bestow on her the Dark Gift as they set out on the fraught and fantastic adventure of their two turbulent centuries together. Vittorio the Vampire (ISBN 9780345422392): Educated in the Florence of Cosimo de' Medici, trained in knighthood at his father's mountaintop castle, Vittorio inhabits a world of courtly splendor and country pleasuresa world suddenly threatened when his entire family is confronted by an unholy power. In the midst of this upheaval, Vittorio is seduced by the beautiful and sinister vampire Ursulasetting in motion a chilling chain of events that will mark his life for eternity.

Against a backdrop of the wondersboth sacred and profaneand the beauty and ferocity of Renaissance Italy, Anne Rice creates a passionate and tragic legend of doomed young love and lost innocence. Merrick (ISBN 9780345422408): In this mesmerizing new novel, Anne Rice demonstrates once again her gift for spellbinding storytelling and the creation of myth and magic, as she weaves together two of her most compelling worlds?

Those of the Vampire Chronicles and the Mayfair witches. Blood and Gold (ISBN 9780345409324): Once a proud Senator in Imperial Rome, Marius is kidnapped and forced into that dark realm of blood, where he is made a protector of the Queen and King of the vampiresin whom the core of the supernatural race resides. Through his eyes we see the fall of pagan Rome to the Emperor Constantine, the horrific sack of the Eternal City at the hands of the Visigoths, and the vile aftermath of the Black Death. Ultimately restored by the beauty of the Renaissance, Marius becomes a painter, living dangerously yet happily among mortals, and giving his heart to the great master Botticelli, to the bewitching courtesan Bianca, and to the mysterious young apprentice Armand. But it is in the present day, deep in the jungle, when Marius will meet his fate seeking justice from the oldest vampires in the world. Blackwood Farm (ISBN 9780345443687): In her new novel, perennial bestseller Anne Rice fuses her two uniquely seductive strains of narrative -- her Vampire legend and her lore of the Mayfair witches -- to give us a world of classic deep-south luxury and ancestral secrets. Welcome to Blackwood Farm: soaring white columns, spacious drawing rooms, bright, sun-drenched gardens, and a dark strip of the dense Sugar Devil Swamp. This is the world of Quinn Blackwood, a brilliant young man haunted since birth by a mysterious doppelgänger, Goblin, a spirit from a dream world that Quinn cant escape and that prevents him from belonging anywhere.

When Quinn is made a Vampire, losing all that is rightfully his and gaining an unwanted immortality, his doppelgänger becomes even more vampiric and terrifying than Quinn himself. As the novel moves backwards and forwards in time, from Quinns boyhood on Blackwood Farm to present day New Orleans, from ancient Athens to 19th-century Naples, Quinn seeks out the legendary Vampire Lestat in the hope of freeing himself from the spectre that draws him inexorably back to Sugar Devil Swamp and the explosive secrets it holds. A story of youth and promise, of loss and the search for love, of secrets and destiny, Blackwood Farm is Anne Rice at her mesmerizing best. Blood Canticle (ISBN 9780345443694): Surrounded by its brooding swampscape, Blackwood Farm is alive with the comings and goings of the bewitched and the bewitching.

Among them is the ageless vampire Lestat, vainglorious enough to believe that he can become a saint, weak enough to fall impossibly in love. Gripped by his unspeakable desire for the mortal Rowan Mayfair and taking the not so innocent, new-to-the-blood Mona Mayfair under his wing, Lestat braves the wrath of paterfamilias Julien Mayfair and ventures to a private island off the coast of Haiti. There, Saint Lestat will get his chance to slay his dragon. For Mona and the Mayfairs share an explosive, secret blood bond to another deathless species: a five-thousand-year-old race of Taltos, strangers held in the throes of evil itself. Prince Lestat (ISBN 9780345803658): THE VAMPIRE WORLD IS IN CRISIS. Left with little time to spare, a host of familiar characters including Louis de Pointe du Lac, Armand, and even the vampire Lestat, must embark on a journey to discover whoor whatis driving this mysterious being. Prince Lestat and the Realms of Atlantis (ISBN 9780804173148): In my dreams, I saw a city fall into the sea. And all the world was shaken. Caught up in an urgent and fundamental quest to understand the origins of the Undead and the deeper meanings of existence for both mortals and immortals.

Now Lestat, Prince of the vast tribe of the undead, finds himself at war with a strange, ancient, otherworldly form that has somehow taken possession of his immortal body and spirit, and it is through this perilous and profound struggle that we come to be told the hypnotic tale of a great sea power of ancient times: a mysterious heaven on earth situated on a boundless continent in the Atlantic Ocean. As we learn of the mighty, resonant powers and perfections of this lost kingdom of Atalantaya, the lost realms of Atlantis, we come to understand how and why the vampire Lestat, indeed all the vampires, must reckon so many millennia later with the terrifying force of this ageless, all-powerful Atalantaya spirit. An exhilarating novel that deepens Rices vampire mythology as it brings together the ancient worlds and beings of the Vampire Chronicles and opens up to us a whole new universe of characters, history, storytelling, and legend.

In this spellbinding novel, Lestat, rebel outlaw, addresses the tribe of vampires, telling us the mesmerizing story of how he became prince of the vampire world, and of the formation of the Blood Communion, and how his vision for the Children of the Universe to thrive as one, came to be. Lestat takes us from his ancestral castle in the snow-covered mountains of France to the verdant wilds of lush Louisiana, with its lingering fragrances of magnolias and night jasmine; from the far reaches of the Pacifics untouched islands to the 18th-century city of St. Petersburg and the court of the Empress Catherine.

He speaks of his fierce battle of wits and words with the mysterious Rhoshamandes, proud Child of the Millennia, reviled outcast for his senseless slaughter of the legendary ancient vampire Maharet, avowed enemy of Queen Akasha, who refuses to live in harmony at court and who threatens all Lestat has dreamt of. The item "Interview with The Vampire Chronicles by Anne Rice 15-Book Series Set Paperback" is in sale since Tuesday, January 14, 2020. This item is in the category "Books\Fiction & Literature".