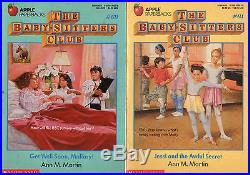 You will get one set of 30 books, numbered 61-90 in the Baby-Sitters Club Young Adult YA Fiction series by Ann Martin, titles as listed below. Size of book and cover art may vary.

Please let us know if you have any questions. Jessi and the Awful Secret (February 1993) - Jessi meets a dancer and suspects that she has an eating disorder. Kristy and the Worst Kid Ever (March 1993) - The Papadakis' new foster child, Lou McNally, is a troublemaker. Friend (April 1993) - Claudia babysits Shea Rodowsky and discovers they have similar struggles with their schooling.

Towne soon begins to take advantage of Mary Anne's generosity. Dawn's Big Move (September 1993) - Dawn decides that seeing her father and brother only on holidays isn't enough, and decides to move back to California for six months.

Jessi and the Bad Baby-sitter (October 1993) - Jessi asks a new girl to join the Baby-Sitters Club, which turns out to be a mistake. (October 1993) - Mallory has not been feeling well and discovers she has mononucleosis.

Stacey and the Cheerleaders (December 1993) - Stacey tries out for the cheerleading squad, but when she falls in love with a basketball player, she begins to think her friends are not mature. Claudia and the Perfect Boy (January 1994) - Claudia starts a personals column in the school newspaper when she becomes desperate for a boyfriend. Dawn and the We Kids Club (February 1994) - In California, the We Love Kids Club experiences fame and tries to handle it.

Mary Anne and Miss Priss (March 1994) - Jenny Prezzioso is driving Mary Anne crazy with her fussy ways, and the Baby-Sitters Club tries to find out why she is behaving this way. Kristy and the Copycat (April 1994) - Kristy's stepsister Karen continually copies her. Jessi's Horrible Prank (May 1994) - Jessi plays a mean trick on her substitute teacher.

Stacey's Lie (June 1994) - Stacey lies to her father to be with her boyfriend Robert during her vacation-but it seems that her father has something to share with her as well. Dawn and Whitney, Friends Forever (August 1994) - Dawn makes a new friend when she babysits a girl with Down syndrome. Claudia and Crazy Peaches (September 1994) - Claudia has trouble with her pregnant aunt. Mary Anne Breaks the Rules (October 1994) - Mary Anne has Logan over during a sitting job and gets caught. Mallory Pike, #1 Fan (November 1994) - Mallory discovers that her favorite author lives in Stoneybrook. Mom (January 1995) - Kristy's stepfather has a heart attack and becomes a stay-at-home dad. Jessi and the Troublemaker (February 1995) - Danielle might be sick, but it is not obvious from her actions. The BSC (March 1995) - Stacey isn't getting along with the members of the Baby-Sitters Club. Dawn and the School Spirit War (April 1995) - Problems start during School Spirit Week and Mary Anne begins to fear going to school.

Claudia Kishi, Live from WSTO! (May 1995) - Claudia works for a radio station, and must deal with her assistant, Ashley Wyeth.

Mary Anne and Camp BSC (June 1995) - The Baby-Sitters Club runs a summer camp for children, but when Mary Anne's father goes away on a business trip, she becomes depressed. Stacey and the Bad Girls (July 1995) - Stacey's new friends are not responsible, and they get her in trouble with a capital T. Farewell, Dawn (August 1995) - Dawn decides to move back to California permanently and has a huge argument with Mary Anne. Kristy and the Dirty Diapers (September 1995) - Davis Diapers starts sponsoring Kristy's Krushers, ruining the way the Krushers play ball. Welcome to the BSC, Abby (October 1995) - Abby Stevenson decides to join the Baby-Sitters Club, but when Kristy starts doubting her after an asthma scare, Abby tries to prove that she should be a member.