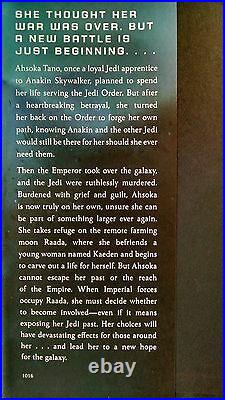 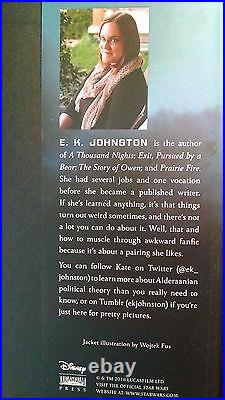 FEEL FREE TO SUBMIT YOUR BEST OFFER! Very limited number of these books was be signed in person by author. A signing appearance in Los Angeles on Nov 6th, 2016.

This was a wristbanded event, and only those with wristbands were able to attend the event. And was only opened to be signed. Please see my store for other rare signed books. Fans have long wondered what happened to Ahsoka after she left the Jedi Order near the end of the Clone Wars, and before she re-appeared as the mysterious Rebel operative Fulcrum in Rebels. Finally, her story will begin to be told.

Following her experiences with the Jedi and the devastation of Order 66, Ahsoka is unsure she can be part of a larger whole ever again. But her desire to fight the evils of the Empire and protect those who need it will lead her right to Bail Organa, and the Rebel Alliance. Gr 7 UpAhsoka Tano holds a special place in the hearts of many "Star Wars" aficionados.

The breakout character of the Star Wars: The Clone Wars TV show finally gets her story told, and fans will not be disappointed. After leaving the order of the Jedis and her teacher Padawan Anakin Skywalker, Ahsoka embarks on a journey to discover who she is and how she can move on after leaving the group that has defined her for so long. She ends up on Raada, a small, out-of-the-way moon base, and begins a new life. When the evil Imperial forces rear their heads, Ahsoka's newly idyllic life starts to sour, and she can't help but heed the familiar call of the Rebel Alliance.

Teens will be able to relate to Ahsoka's emotional journey of attempting to find her place in the world. The plot moves at a slow pace in the first half as Ahsoka tries to deal with her emotions and figure things out. Those who have little to no knowledge of The Clone Wars and Rebels TV shows will be lost, as Johnston gives almost no background on the title character's previous adventures. VERDICT "Star Wars" devotees will rejoice in reading this long-awaited chapter in the life of a fan favorite; others may want to skip this one. Christopher Lassen, BookOps: The New York Public Library and Brooklyn Public Library.

Johnston had several jobs and one vocation before she became a published writer. If shes learned anything, its that things turn out weird sometimes, and theres not a lot you can do about it. Well, that and how to muscle through awkward fanfic because its about a pairing she likes. When she's not on tumblr, she dreams of travel and Tolkien. It really depends on the weather.

The item "SIGNED Ashoka by E. Johnston and Ashley Eckstein, autographed, new" is in sale since Tuesday, March 19, 2019. This item is in the category "Books & Magazines\Books". The seller is "leopoldluxurytimepeace" and is located in Santa Clarita, California. This item can be shipped worldwide.