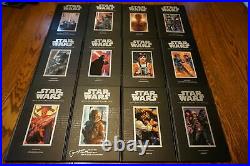 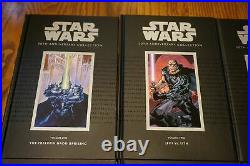 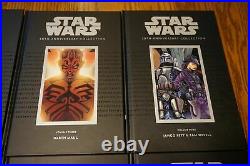 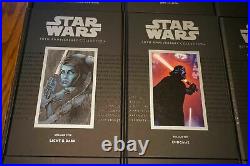 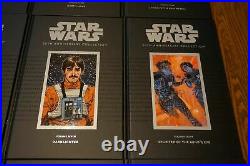 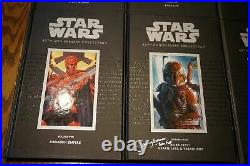 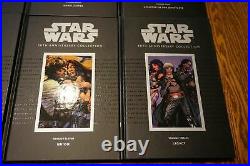 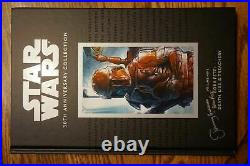 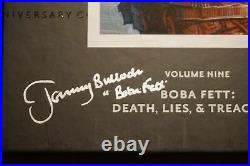 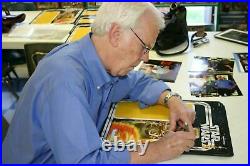 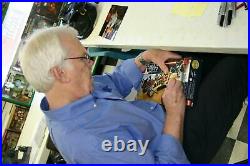 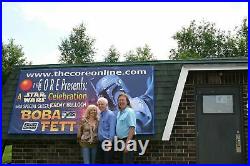 Series was a 12 volume limited-edition hardcover collection of the best of Dark Horse's. Available only through Direct Market retail outlets through the year 2007, published one volume per month, each volume's print run was limited to initial orders and had only ONE printing.

All volumes were immediate sell outs! All TWELVE volumes are included in this listing!

Volume 1--The Freedon Nadd Uprising. The planet Onderon, almost four thousand years before the Battle of Yavin and the events in A New Hope: Freedon Nadd is dead, but his dark spirit lives on, and it has been used to abduct Jedi Master Arca!

Nomi Sunrider and Ulic Qel-Droma lead the mission to free their Master, but not before the evil King Ommin spreads the seeds of Sith evil to a new generation. A thousand years before Luke Skywalker embarked on his fateful confrontation with the Death Star, the Jedi Army of Light met the Sith Army of the Shadow on the planet Ruusan for a climactic showdown that would forever change the galaxy. Before the Battle of Ruusan, there was a mighty Sith Empire that stood against the Republic.

Forever after the battle, there would only be two Sith, master and apprentice. Caught in the struggle between the two armies is a group of plucky orphans who little realize the pivotal part they will play in the outcome of the war, or the future of the Sith.

In the days before Qui-Gon Jinn and Obi-Wan Kenobi's first fateful mission to Naboo, Darth Sidious discovers a threat to his plan for galactic domination-the nefarious criminal organization Black Sun. Unwilling to tolerate such opposition to his Imperial ambitions, the Sith lord sends his apprentice Darth Maul to deal with this cartel of space mobsters. Step by deadly step Maul infiltrates Black Sun, eliminating its lieutenants and working his way into its inner sanctum. Yet those who rule this society of evil do not intend to be vanquished so easily. It's all-out action as the darkest forces in the galaxy vie for power in a battle that will have dire consequences for the future of the Republic.

When a mysterious employer hires Jango Fett to retrieve an ancient artifact, it's no surprise to find the beautiful and deadly Zam Wesell in pursuit of the same prize. Will this pair of fair-weather foes double-cross each other to land this lucrative score, or will a shared past convince the two that teamwork is the key to success. The Clone Wars have begun, and what it means to be a Jedi will be changed forever! Taking on new roles as generals, warriors, and even spies, the Jedi face difficult choices about their ideals, and what they are willing to sacrifice for the Republic they are sworn to protect. Jedi Master Quinlan Vos has had more than his share of brushes with the dark side of the Force, which is exactly why he is chosen to pierce the inner circle of Count Dooku, the ex-Jedi Separatist leader.

Yet to complete his mission, Vos must plunge headlong into the shadow of the dark side-a path from which there may be no return! Witness the untold stories of the Jedi who took a last stand against Emperor Palpatine in the moments during, and immediately after, the events in Revenge of the Sith! Quinlan Vos wages a battle of impossible odds against his own troops to protect his loved ones, Jedi Master Kai Huddora takes a terrified Padawan into his charge after her own master falls to Order 66, Dass Jennir finds himself in league with a band of rebels he'd led attacks against only days before, and a brave few Jedi will plot to topple Sith rule-by setting a trap for the newly unveiled Darth Vader! This is the story of Biggs Darklighter-boyhood friend of Luke Skywalker, Imperial pilot, and hero of the Rebellion. Follow Biggs from his departure from Tatooine to attend the Imperial Academy, to his decision to lead a mutiny against the Empire and join the Rebellion, and finally, to his brave sacrifice during the attack on the Death Star.

Volume 8--Splinter of the Mind's Eye. Luke Skywalker and Princess Leia face off against Darth Vader over an ancient artifact of legendary power! Deep in the swamplands of the planet Mimban lies a powerful crystal, capable of giving its possessor such mastery over the Force as to be nearly invincible.

In the right hands, it could save the galaxy. In the wrong hands, it could destroy it! With the explosion of the first Death Star still reverberating through the cosmos, Luke and Leia will find that the war they thought they won was only a battle, and that the dark side of the Force still stalks the galaxy. 9--Boba Fett: Death, Lies, and Treachery.

Throughout the vast reaches of the galaxy, wherever fugitives meet or lawbreakers conspire, one name is always uttered in hushed tones, a name guaranteed to strike fear into the stoutest heart--Boba Fett. His prices are exorbitant, but if you're looking for revenge, or if you're looking for protection, he'll get the job done. The cover of vol 9 is. In silver ink by the Fett himself, Mr.

Please see close up photo of signature detail. Please see photos of the signing event at our store with Mr. Of course, if you're looking to reclaim your kidnapped fiancé, the heiress to a Hutt's fortune, no price is too exorbitant. Navigating a web of villainy and deceit, Fett will go above and beyond the call to do what he does best-get it done and get paid! In all the galaxy, there are no more fearsome warriors than the Emperor's Imperial Guard, and none is more loyal than Kir Kanos. But when Carnor Jax-the most formidable of this elite brotherhood-betrays the Emperor and orders the murder of the Guard, Kanos must escape to avenge his master. For Kir Kanos, the last loyal Imperial Guard, and the final threat to Jax's rise to power, it is vengeance or death-there are no alternatives! When Luke Skywalker, the New Republic's greatest hero, decides to marry Mara Jade, the woman who was once the Emperor's personal assassin, you can be sure that hands both Imperial and New Republican will be raised to stop the marriage-at any cost! Starring Han and Leia, Chewbacca and Lando, Union marks a monumental event that links the classic trilogy to the boundless future of the Star Wars galaxy! More than a hundred years have passed since the events in Return of the Jedi and the days of the New Jedi Order. There is a new evil gripping the galaxy, shattering a resurgent Empire and seeking to destroy the last of the Jedi. Even as their power is failing, the Jedi hold to one final hope-the last remaining heir to the Skywalker legacy!