STAR WARS THE HEART OF THE JEDI First Edition, New, Out of Print, Ultra Rare 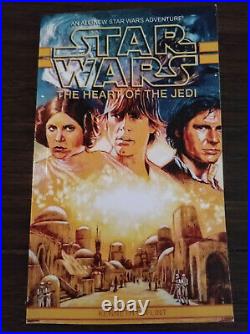 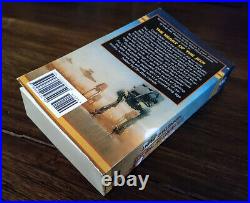 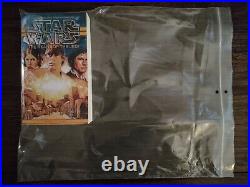 Star Wars: The Heart of the Jedi, by Kenneth C. NEW - FIRST EDITION - ULTRA RARE - HIGHLY COLLECTABLE - NOW OUT OF PRINT - BRITISH VERSION. Darth Vader and the Emperor are no more.

The Alliance has officially become the New Republic. As Han Solo, Princess Leia, and new Chief-of-State Mon Mothma emerge triumphant against the diminishing Empire, the Imperial Remnant fights on until the long-silent Imperial Senate rises up to call for peace. But not everyone wants peace, and High Admiral Tharkus has made plans to ensure the Empire will re-emerge under his rule. At his side stands the mysterious Dioskouroi, beings of rare and deadly powers! For Luke Skywalker, exhausted from years of fighting, the time has come to depart upon a journey of discovery, a journey that will lead him to a secret long ago hidden by Obi-Wan Kenobi.

This is a brand new, fresh-out-of-the-box, first (and probably final) edition copy of Kenneth C. Flint's Star Wars novel: "The Heart of the Jedi", in paperback, printed in Great Britain. This is (probably) the last Expanded Universe/Legends Star Wars novel ever to be released.

It remains unread and hasn't been opened other than a careful inspection of the first few pages to check that it was printed properly. It has been stored in the clear, sealed wallet as seen in the photo provided; ever since my receipt and inspection of the book.

Hopefully the photographs that I've attached reflect the 99.9% perfect condition of the book. The only very minor signs of anything short of a 100% perfect condition were present when I received the book, and appear to have been caused in transit. I'll be making sure to pack it well for you. A short summary of this history of the writing and publication of this book that explains its extreme rarity: Flint was approached by Lucas Books to write this long before the Disney takeover, but upon completing it he was told that the story he'd written no longer fitted in with the direction that other Lucas-approved Star Wars books were going; and so his book wasn't published. In 2015, Flint began a process of gifting his updated/edited version of The Heart of the Jedi to the Star Wars fan community for free, online, where it has remained to this day.

In May of 2021 a fan decided to release this book in self-published form through Amazon. Only a few days after sales began Amazon took this book down, due to its bootleg nature (likely at the request of Disney). So only the printings that were ordered over a span of a few days exist; and the total quantity of existing hard copies is further decreased by the fact that this release wasn't officially marketed in any way. The price I've chosen isn't meant to represent its value, but instead just reflects what it would have to take for me to part ways with what is obviously a very special, almost unique item.

The item "STAR WARS THE HEART OF THE JEDI First Edition, New, Out of Print, Ultra Rare" is in sale since Tuesday, May 11, 2021. This item is in the category "Collectables\Science Fiction Collectables\Star Wars Collectables\Books".

The seller is "skb_collectables" and is located in Prenton. This item can be shipped worldwide.