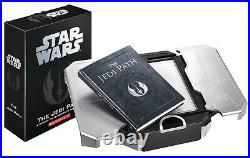 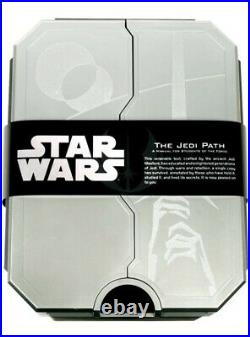 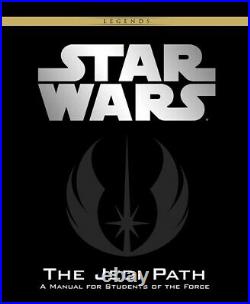 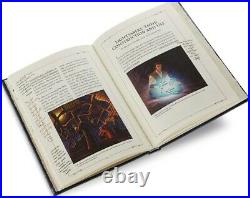 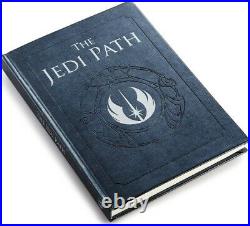 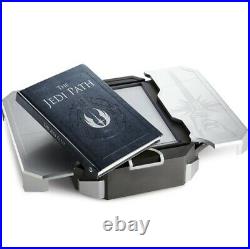 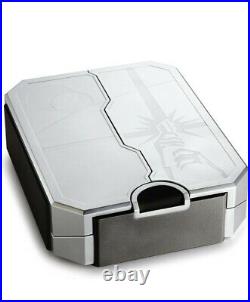 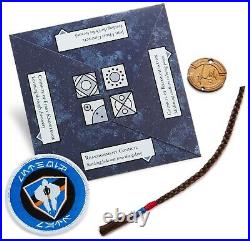 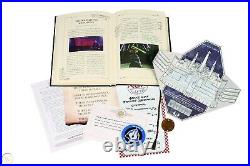 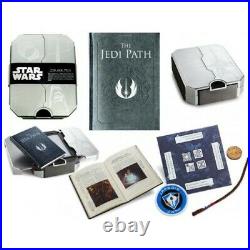 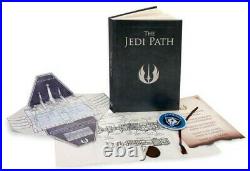 Star Wars The Jedi Path: Manual of the Force - Vault Edition NEW Factory Sealed. A new in box, unread, unused book in perfect condition with no missing or damaged pages. Very Rare in this condition. There is some wear on the outer shipper packaging but the contents are sealed and in immaculate condition.

STAR WARS THE JEDI PATH : A MANUAL FOR STUDENTS OF THE FORCE [VAULT EDITION]. The Jedi Path, Fully Illustrated, with Removable Features and a Mechanical Vault. With the push of a button, the doors of the vault open in a wash of light and Star Wars sound effects. The inner platform rises, revealing this exclusive edition of The Jedi Path. This ancient training manual, crafted by early Jedi Masters, has educated and enlightened generations of Jedi.

It explains the history and hierarchy of the Jedi Order, and what Jedi must know to take their place as defenders of the peace in the galaxy-from mastery of the Force to the nuances of lightsaber combat. Passed down from Master to Padawan, the pages of this venerable text have been annotated by those who have held it, studied it, and lived its secrets. From Yoda and Luke Skywalker to Count Dooku and Darth Sidious, they have shaped the content of the book by leaving mementos tucked within the pages, tearing out pages, and adding their personal experiences as tangible reminders of the lessons they've learned. Through wars and rebellion, only a single copy of this manual has survived.

It is now passed on to you. The ancient Masters who wrote the text: Fae Coven, Grand Master and head of the Jedi Council; Crix Sunburris, Jedi Ace starfighter pilot; Restelly Quist, Jedi Chief Librarian; Skarch Vaunk, Jedi Battlemaster and lightsaber expert; Bowspritz, Jedi Biologist and expert on the Living Force; Sabla-Mandibu, Jedi Seer and Holocron expert; Morrit Ch'gally, Jedi Recruiter; Gal-Stod Slagistrough, Jedi leader of the Agricultural Corps. Jedi who added personal commentary: Yoda, Thame Cerulian, Count Dooku, Qui-Gon Jinn, Obi-Wan Kenobi, Anakin Skywalker, Ahsoka Tano, Darth Sidious, and Luke Skywalker. Removable features: A letter tracing the book's history, a severed Padawan braid, a metal Jedi Credit medallion, a Jedi starfighter patch, a burned poster of the Jedi Code, a map of the Jedi Temple, a lightsaber diagram sketched on the back of a napkin from Dex's Diner, and a note on the missing pages torn from the book by a Sith. Created in collaboration with Lucasfilm-along with an acclaimed Star Wars author and revered Star Wars illustrators-this volume provides new insights into the history and lore of the Jedi Order while introducing never-before-seen ships, creatures, characters, and details about how one trains to become a Jedi.

The Jedi Path is for adults, and is intended for ages 14 and up. Daniel Wallace is the New York Times bestselling author of Star Wars: The New Essential Guide to Characters as well as a dozen more books that explore the underpinnings of the Star Wars universe, including Star Wars: The Essential Atlas and The Complete Star Wars Encyclopedia. He is a regular contributor to Star Wars Insider magazine and assembled the questions used in the Star Wars Trivial Pursuit game. In addition to making many contributions to the galaxy far, far away, he has written for universes including Indiana Jones, Smallville, Supernatural, DC Comics, and Marvel Comics. Contributing Artists: Paul Allan Ballard, Jeff Carlisle, Tommy Lee Edwards, Ryan Hobson, Greg Knight, Chris Reiff, Derek Thompson, Chris Trevas, Terryl Whitlatch, Kieran Yanner, and the studios of Conceptopolis and Storm Lion.

Becker & Mayer Book Producers; 58798th edition (September 28, 2010). 10.5 x 4 x 12.75 inches. Few books tied to iconic movie series are as playful or as well-thought-out as The Jedi Path. From the conceit that the book consists of a series of documents discovered "near the ruins of Byss" to the inclusion of coins, badges, and other artifacts, the contributors have managed to create a tactile and delightful addition to the Star Wars canon. Introductory sections set out the Jedi Code and history of the Jedi Order, while later sections discuss such subjects as the three pillars, becoming an apprentice, and advanced lightsaber techniques.

Not only is the text copiously illustrated, but some pages are mischievously ripped out (the Prophecy of the Chosen One) and supposedly handwritten annotations by Obi-Wan Kenobi and others add to the experience. Particularly enjoyable is a galactic bestiary featuring such creatures as a Jodakan needler crab, Mygeetan whiteworm, and the furry but cranky-looking o'cerry. For those who prefer history, an explanation of "The Second Great Schism and the Final War" provides further illumination on the role of the Sith in the Star Wars mythos. The creators of The Jedi Path clearly love Star Wars, and just as clearly wanted to pass that love on to readers.

Highly recommended as a gift book for all Jedi enthusiasts, from rank beginners to grand masters. We believe any issue can be easily resolved as long as we are aware of it, usually resulting in a positive outcome.