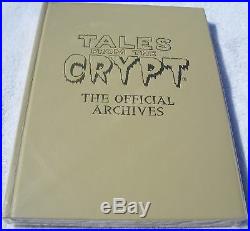 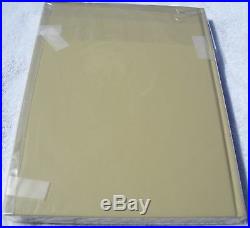 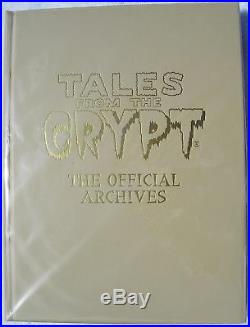 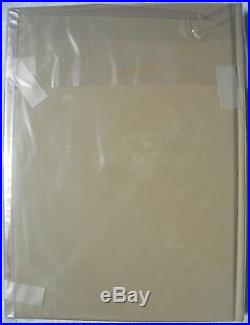 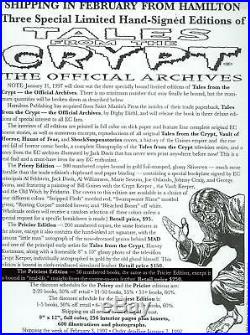 National Public Radio commentator Diehl recounts the history of Tales from the Crypt, which has scared horror fans through comics, television, and movies for 40 years. Tales from the Crypt Official Archives limited edition hardcover centers on four special sections, each of which is worth the price of the whole book: there are biographies of 13 artists from the E. Stable; glossy, full-color covers for all 105 E. Horror comics; 4 beautifully reproduced, complete tales in their original form (on creamy white paper stock); and a never-before-seen "Picto-Fiction" story from E.

S heyday, illustrated by Jack Davis. All of this and more has been lovingly put together by literary correspondent and columnist, Digby Diehl. Tales From The Crypt: The Official Archives by Digby Diehl as published by St. Martin's Press and Hamilton Comics Ltd, 1996.

This is one of the limited signed genuine leather hardcover editions published by Bruce Hamilton's Hamilton Comics Ltd, with a signed bookplate inside the front cover. Beige edition is signed by seven of the original EC Comics artists and writers. It also includes a hand-inked art signature, with the famous "little man" autograph of the now-deceased genius behind MAD and one of the principal early artists for Tales from the Crypt, Harvey Kurtzman. It also includes a frameable 8' x 10 glossy photo of the television Crypt Keeper, individually autograped in gold by the old ghoul himself.

Finally, this awesome limited edition also includes a statement of authenticity hand signed by Bruce Hamilton himself stating that this copy / edition is limited to 50 and bound in genuine leather. Martin's Press published the hardcover trade editions and softcover editions, Bruce Hamilton had the rights to publish the limited edition versions. With the interior pages and contents being exactly the same, Hamilton Comics published four different; Pricey Editions, each one limited and with different colored covers. Each of the four colored editions had EC ghoulish-names attached to them. The red cover version was called Stripped Flesh mottled red. The green cover version was called Swamp water Slime mottled green. The Brown cover version was called Rotting Corpse mottled brown. The off white cover version was called Bleached Bones. Each of the 500 copies (the copies were not individually numbered) was bound in gold foil stamped, glossy Skivertex (which is much more durable than the trade editions chipboard and paper binding) and printed in full color on off white slick paper. Each of Pricey Edition, "colored", limited editions contains a special. Bookplate inside the front cover. The bookplate is Hand-Signed by seven of the original EC Comics artists and writers; Jack Davis, Joe Orlando, Johnny Craig, Al Feldstein, Al Williamson, Marie Severin, and George Evans. This "Priciest Edition" was limited to only 50 beige genuine leather copies world-wide. Although, the "Priciest Edition" was originally advertised as being a numbered out of 50 book, they were never actually numbered (for reasons unknown) nor did they include an original certificate of authenticity.

Included is all the correspondence between Green Apple Books and Bruce Hamilton and the statement of authenticity (which other copies DO NOT include). This book is not strictly about the television show, as a matter of fact, it's 75-80% about the history of EC Comics, the trials and tribulations of Bill Gaines and the US Senate hearings, the fan publications and reprints that lead to EC Comic's resurgence, and finally how all this lead to Hollywood and the TV series and several motion pictures. The official biography of the Crypt Keeper and the history of EC Horror Comics. A previously unpublished picto-fiction horror story drawn by Jack Davis.

All 105 EC Horror Comic covers reproduced in full-color. A pictorial "filmography" of the award-winning HBO and Fox Television series featuring credits, synopses, and episode guide. Four original (and complete) stories by Jack Davis, Al Feldstein, Graham Ingels, and Jack Kamen reprinted from the actual art and reproduced in color in their original size.

Brief biographies and portfolios of the key EC artists. Collectible section highlighting the coolest and most valuable Crypt merchandise.

Bound in "real life", straight-from-the-corpse-to-you genuine beige leather. A hand-inked art signature, with the famous "little man" autograph of the now-deceased genius behind MAD and one of the principal early artists for Tales from the Crypt, Harvey Kurtzman. A frameable 8' x 10 glossy photo of the television Crypt Keeper, individually autograped in gold by the old ghoul himself. A statement of authenticity hand signed by Bruce Hamilton himself stating that this copy / edition is limited to 50 and bound in genuine leather (which other like copies DO NOT include).

The item "Tales from the Crypt The Official Archives Hardcover Rare Leather HC Ltd to 50" is in sale since Saturday, June 18, 2011. This item is in the category "Books\Fiction & Literature". The seller is "collectible_entertainment" and is located in Palm Bay, Florida. This item can be shipped worldwide.