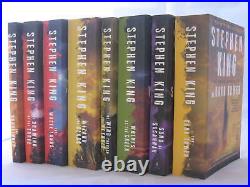 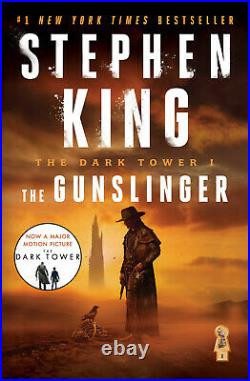 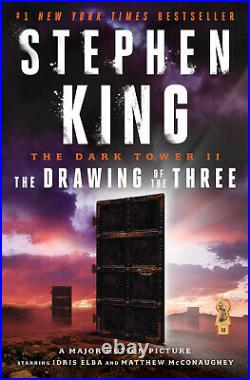 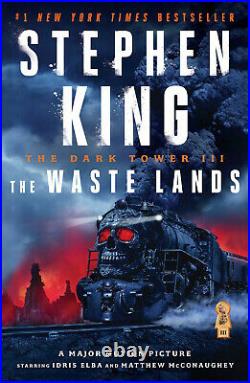 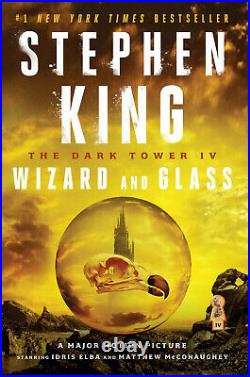 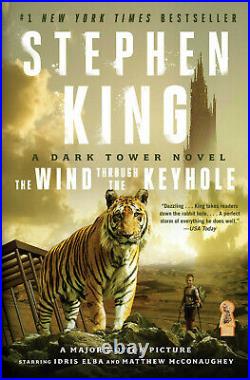 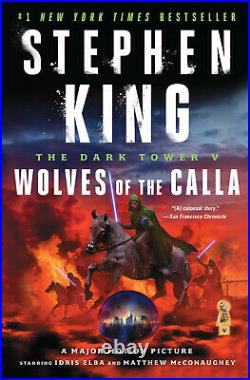 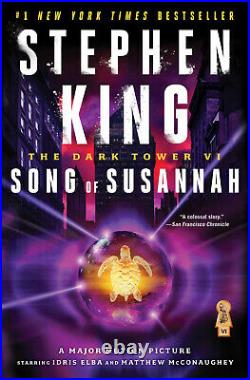 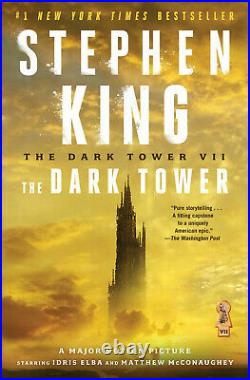 The Dark Tower by Stephen King (Books 1-8 in the Epic Fantasy Series, Trade Paperback Novels). This 8-book set of trade paperback novels includes the below titles. The Gunslinger (The Dark Tower I) ISBN 9781501143519: He is a haunting figure, a loner on a spellbinding journey into good and evil. In his desolate world, which mirrors our own in frightening ways, Roland tracks The Man in Black, encounters an enticing woman named Alice, and begins a friendship with the boy from New York named Jake.

The Drawing of the Three (The Dark Tower II) ISBN 9781501143533: Beginning just less than seven hours after The Gunslinger ends, in the second installment to the thrilling Dark Tower Series, Roland encounters three mysterious doorways on a deserted beach along the Western Sea. Each one enters into a different persons life in New Yorkhere, he joins forces with the defiant young Eddie Dean, and with the beautiful, brilliant, and brave Odetta Holmes, to save the Dark Tower. The Waste Land (The Dark Tower III) ISBN 9781501143540: Several months have passed since The Drawing of the Three, and in The Waste Lands, Rolands two new tet-mates have become trained gunslingers. Eddie Dean has given up heroin, and Odettas two selves have joined, becoming the stronger and more balanced personality of Susannah Dean. But Roland altered ka by saving the life of Jake Chambers, a boy whoin Rolands worldhas already died.

Now Roland and Jake exist in different worlds, but they are joined by the same madness: the paradox of double memories. Roland, Susannah, and Eddie must draw Jake into Mid-World and then follow the Path of the Beam all the way to the Dark Tower. There are new evilsnew dangers to threaten Rolands little band in the devastated city of Lud and the surrounding wastelands, as well as horrific confrontations with Blaine the Mono, the piratical Gasher, and the frightening Tick-Tock Man.

Wizard and Glass (The Dark Tower IV) ISBN 9781501143557: as Roland the Gunslinger, Eddie, Susannah, and Jake survive Blaine the Monos final crash, only to find themselves stranded in an alternate version of Topeka, Kansas, that has been ravaged by the superflu virus. While following the deserted I-70 toward a distant glass palace, Roland recounts his tragic story about a seaside town called Hambry, where he fell in love with a girl named Susan Delgado, and where he and his old tet-mates Alain and Cuthbert battled the forces of John Farson, the harrier whowith a little help from a seeing sphere called Maerlyns Grapefruitignited Mid-Worlds final war.

Roland Deschain and his ka-tet Jake, Susannah, Eddie, and Oy, the billy-bumbler encounter a ferocious storm just after crossing the River Whye on their way to the Outer Baronies. As they shelter from the howling gale, Roland tells his friends not just one strange story but two... And in so doing, casts new light on his own troubled past. In his early days as a gunslinger, in the guilt-ridden year following his mother s death, Roland is sent by his father to investigate evidence of a murderous shape-shifter, a skin-man preying upon the population around Debaria.

Roland takes charge of Bill Streeter, the brave but terrified boy who is the sole surviving witness to the beast s most recent slaughter. Only a teenager himself, Roland calms the boy and prepares him for the following day s trials by reciting a story from the Magic Tales of the Eld that his mother often read to him at bedtime. A person s never too old for stories, Roland says to Bill.

The Wind Through the Keyhole is sure to fascinate avid fans of the Dark Tower epic. But this novel also stands on its own for all readers, an enchanting and haunting journey to Roland s world and testimony to the power of Stephen King s storytelling magic.

Wolves of the Calla (The Dark Tower V) ISBN 9780743251624: Set in a world of extraordinary circumstances, filled with stunning visual imagery and unforgettable characters, the Dark Tower series is unlike anything you have ever read. Here is the fifth installment. Song of Susannah (The Dark Tower VI) ISBN 9780743254557: The next-to-last novel in Stephen King's seven-volume magnum opus, Song of Susannah is at once a book of revelation, a fascinating key to the unfolding mystery of the Dark Tower, and a fast-paced story of double-barreled suspense. To give birth to her "chap, " demon-mother Mia has usurped the body of Susannah Dean and used the power of Black Thirteen to transport to New York City in the summer of 1999. The city is strange to Susannah...

With each other and with an alien environment? "Go todash" to Castle Discordia on the border of End-World. In that forsaken place, Mia reveals her origins, her purpose, and her fierce desire to mother whatever creature the two of them have carried to term.

Eddie and Roland, meanwhile, tumble into western Maine in the summer of 1977, a world that should be idyllic but isn't. For one thing, it is real, and the bullets are flying. For another, it is inhabited by the author of a novel called'Salem's Lot, a writer who turns out to be as shocked by them as they are by him. These are the simple vectors of a story rich incomplexity and conflict.

Its dual climaxes, one at the entrance to a deadly dining establishment and the other appended to the pages of a writer's journal, will leave readers gasping for the saga's final volume (which, Dear Reader, follows soon, say thank ya). The Dark Tower (The Dark Tower VII) ISBN 9780743254564: Set in a world of extraordinary circumstances, filled with stunning visual imagery and unforgettable characters, The Dark Tower series is unlike anything you have ever read. The final book opens like a door to the uttermost reaches of Stephen King's imagination. You've come this far. The sound you hear may be the slamming of the door behind you.

Welcome to The Dark Tower. The item "The Dark Tower by Stephen King (8-Book Set of Trade Paperback Novels in Series)" is in sale since Friday, May 11, 2018. This item is in the category "Books\Fiction & Literature".