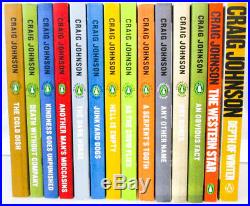 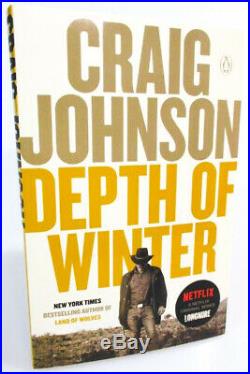 Walt Longmire #1-14: Book Series by Craig Johnson (Paperback). The 14-book set of trade paperback novels includes the below titles. The Cold Dish (ISBN 9780143036425): After twenty-five years as sheriff of Absaroka County, Walt Longmires hopes of finishing out his tenure in peace are dashed when Cody Pritchard is found dead near the Northern Cheyenne Reservation. Two years earlier, Cody has been one of four high school boys given suspended sentences for raping a local Cheyenne girl. Somebody, it would seem, is seeking vengeance, and Longmire might be the only thing standing between the three remaining boys and a Sharps.

With lifelong friend Henry Standing Bear, Deputy Victoria Moretti, and a cast of characters both tragic and humorous enough to fill in the vast emptiness of the high plains, Walt Longmire attempts to see that revenge, a dish best served cold, is never served at all. Death Without Company (ISBN 9780143038382) : When Mari Baroja is found poisoned at the Durant Home for Assisted Living, Sheriff Longmire is drawn into an investigation that reaches fifty years into the mysterious womans dramatic Basque past. Aided by his friend Henry Standing Bear, Deputy Victoria Moretti, and newcomer Santiago Saizarbitoria, Sheriff Longmire must connect the specter of the past to the present to find the killer among them. Kindness Goes Unpunished (ISBN 9780143113133): Walt Longmire has been Sheriff of Absaroka County, Wyoming, for almost a quarter of a century, but when he joins his good friend Henry Standing Bear on a trip to the City of Brotherly Love to see his daughter, Cady, he's in for a shock. Walt hasn't even put his boots up when Cady is viciously attacked and left near death on the steps of the Franklin Institute.

He soon discovers that she has unwittingly become involved in a deadly political cover-up. Backed by Henry, Dog, Deputy Victoria Moretti, and the entire Moretti posse of Philadelphia police officers, Walt unpacks his saddlebag of tricks to mete out some Western-style justice. Another Man's Moccasins (ISBN 9780143115526): When the body of a young Vietnamese woman is discovered alongside the interstate in Wyoming's Absaroka County, Sheriff Walt Longmire finds only one suspect, Virgil White Buffalo, a Crow with a troubling past. In what begins as an open-and-shut case, Longmire gets a lot more than he bargained for when a photograph in the young woman's purse connects her to an investigation that Longmire tackled forty years ago as a young Marine investigator in Vietnam.

In the fourth book in Craig Johnson's award-winning Walt Longmire series, the though yet tender sheriff is up to his star in a pair of murders connected by blood, yet separated by forty haunted years. The Dark Horse (ISBN 9780143117315): Wade Barsad, a man with a dubious past and a gift for making enemies, burned his wife Mary's horses in their barn; in retribution, she shot him in the head six times, or so the story goes. But Sheriff Walt Longmire doesn't believe Mary's confession and is determined to dig deeper. Junkyard Dogs (ISBN 9780143119531): It's a volatile new economy in Durant when the owners of a multimillion-dollar development of ranchettes want to get rid of the adjacent Stewart junkyard.

Meeting the notorious Stewart clan is an adventure unto itself, and when conflict eruptsand someone ends up deadSheriff Walt Longmire, his lifelong friend Henry Standing Bear, and deputies Santiago Saizarbitoria and Victoria Moretti find themselves in a small town that feels more and more like a high-plains pressure cooker. Hell Is Empty (ISBN 9780143120988): Well-read and world-weary, Sheriff Walt Longmire has been maintaining order in Wyoming's Absaroka County for more than thirty years, but in this riveting seventh outing, he is pushed to his limits. Raynaud Shade, an adopted Crow Indian rumored to be one of the country's most dangerous sociopaths, has just confessed to murdering a boy ten years ago and burying him deep within the Bighorn Mountains.

Walt is asked to transport Shade through a blizzard to the site, but what begins as a typical criminal transport turns personal when the veteran lawman learns that he knows the dead boy's family. Guided only by Indian mysticism and a battered paperback of Dante's Inferno, Walt braves the icy hell of the Cloud Peak Wilderness Area, cheating death to ensure that justice--both civil and spiritual--is served. As the Crow Flies (ISBN 9780143123293): Embarking on his eighth adventure, Wyoming Sheriff Walt Longmire doesn't have time for cowboys and criminals. His daughter, Cady, is getting married in two weeks, and the wedding locale arrangements have just gone up in smoke signals. Fearing Cady's wrath, Walt and his old friend Henry Standing Bear set out for the Cheyenne Reservation to find a new site for the nuptials. But their expedition ends in horror as they witness a young Crow woman plummeting from Painted Warrior's majestic cliffs. Is it a suicide, or something more sinister? It's not Walt's turf, but he's coerced into the investigation by Lolo Long, the beautiful new tribal police chief. A Serpent's Tooth (ISBN 9780143125464): Its homecoming for the Durant Dogies when Cord Lynear, a Mormon lost boy forced off his compound for rebellious behavior, shows up in Absaroka County. Without much guidance, divine or otherwise, Sheriff Walt Longmire, Victoria Moretti, and Henry Standing Bear search for the boys mother and find themselves on a high-plains scavenger hunt that ends at the barbed-wire doorstep of an interstate polygamy group. Run by four-hundred-pound Roy Lynear, Cords father, the group is frighteningly well armed and very good at keeping secrets. Walts got Cord locked up for his own good, but the Absaroka County jailhouse is getting crowded since the arrival of the boys self-appointed bodyguard, a dangerously spry old man who claims to be blessed by Joseph Smith himself. As Walt, Vic, and Henry butt heads with the Lynears, they hear whispers of Big Oil and the CIA and fear they might be dealing with a lot more than they bargained for. Any Other Name (ISBN 9780143126973): In Any Other Name, Walt is sinking into high-plains winter discontent when his former boss, Lucian Conally, asks him to take on a mercy case in an adjacent county. Detective Gerald Holman is dead and Lucian wants to know what drove his old friend to take his own life.

With the clock ticking on the birth of his first grandchild, Walt learns that the by-the-book detective might have suppressed evidence concerning three missing women. Digging deeper, Walt uncovers an incriminating secret so dark that it threatens to claim other lives even before the sheriff can serve justiceWyoming style.

Dry Bones (ISBN 9780143108184): When Jen, the largest, most complete Tyrannosaurus rex skeleton ever found surfaces in Sherriff Walt Longmires jurisdiction, it appears to be a windfall for the High Plains Dinosaur Museumuntil Danny Lone Elk, the Cheyenne rancher on whose property the remains were discovered, turns up dead, floating face down in a turtle pond. With millions of dollars at stake, a number of groups step forward to claim her, including Dannys family, the tribe, and the federal government. As Wyomings Acting Deputy Attorney and a cadre of FBI officers descend on the town, Walt is determined to find out who would benefit from Dannys death, enlisting old friends Lucian Connolly and Omar Rhoades, along with Dog and best friend Henry Standing Bear, to trawl the vast Lone Elk ranch looking for answers to a sixty-five-million-year-old cold case thats heating up fast. An Obvious Fact (ISBN 9780143109129): In the midst of the largest motorcycle rally in the world, a young biker is run off the road and ends up in critical condition.

When Sheriff Walt Longmire and his good friend Henry Standing Bear are called to Hulett, Wyomingthe nearest town to America's first national monument, Devils Towerto investigate, things start getting complicated. As competing biker gangs; the Bureau of Alcohol, Tobacco, and Firearms; a military-grade vehicle donated to the tiny local police force by a wealthy entrepreneur; and Lola, the real-life femme fatale and namesake for Henry's'59 Thunderbird (and, by extension, Walt's granddaughter) come into play, it rapidly becomes clear that there is more to get to the bottom of at this year's Sturgis Motorcycle Rally than a bike accident. After all, in the words of Arthur Conan Doyle, whose Adventures of Sherlock Holmes the Bear won't stop quoting, There is nothing more deceptive than an obvious fact.

The Western Star (ISBN 9780143109136): Sheriff Walt Longmire is enjoying a celebratory beer after a weapons certification at the Wyoming Law Enforcement Academy when a younger sheriff confronts him with a photograph of twenty-five armed men standing in front of a Challenger steam locomotive. It takes him back to when, fresh from the battlefields of Vietnam, then-deputy Walt accompanied his mentor Lucian to the annual Wyoming Sheriff's Association junket held on the excursion train known as the Western Star, which ran the length of Wyoming from Cheyenne to Evanston and back. Armed with his trusty Colt. 45 and a paperback of Agatha Christie's Murder on the Orient Express , the young Walt was ill-prepared for the machinations of twenty-four veteran sheriffs, let alone the cavalcade of curious characters that accompanied them.

The photographalong with an upcoming parole hearing for one of the most dangerous men Walt has encountered in a lifetime of law enforcementhurtles the sheriff into a head-on collision of past and present, placing him and everyone he cares about squarely on the tracks of runaway revenge. Depth of Winter (ISBN 9780525522492): Walt journeys into the northern Mexican desert alone to save his daughter Cady, who has been kidnapped by the cartel. Welcome to Walt Longmire's worst nightmare.

Winter is creeping closer, but for Sheriff Longmire this one is looking to be harsh in a way to which he is wholly unaccustomed. He has found himself in the remotest parts of the northern Mexican desert, a lawless place where no horse or car can travel, where no one speaks his language or trusts an outsider, far from his friends and his home turf back in Wyoming. But desperate times call for desperate measures. Tomas Bidarte, the head of one of the most vicious drug cartels in Mexico, has kidnapped Walt's beloved daughter, Cady. The American government is of limited help and the Mexican one even less so. 45 and a father's intuition, Walt must head into the 110-degree heat of the desert, one man against an army. The item "Walt Longmire #1-14 Book Series by Craig Johnson" is in sale since Friday, February 7, 2020. This item is in the category "Books\Fiction & Literature". The seller is "sandimagebooks" and is located in Pahrump, Nevada. This item can be shipped to United States, Canada, United Kingdom, Denmark, Romania, Slovakia, Bulgaria, Czech republic, Finland, Hungary, Latvia, Lithuania, Malta, Estonia, Australia, Greece, Portugal, Cyprus, Slovenia, Japan, China, Sweden, South Korea, Indonesia, Taiwan, Thailand, Belgium, France, Hong Kong, Ireland, Netherlands, Poland, Spain, Italy, Germany, Austria, Bahamas, Israel, Mexico, New Zealand, Philippines, Singapore, Switzerland, Norway, Saudi arabia, United arab emirates, Qatar, Kuwait, Bahrain, Croatia, Malaysia, Brazil, Chile, Costa rica, Dominican republic, Panama, Trinidad and tobago, Guatemala, El salvador, Honduras, Jamaica, Antigua and barbuda, Aruba, Belize, Dominica, Grenada, Saint kitts and nevis, Saint lucia, Montserrat, Turks and caicos islands, Bangladesh, Bermuda, Brunei darussalam, Bolivia, Ecuador, Egypt, French guiana, Guernsey, Gibraltar, Guadeloupe, Iceland, Jersey, Jordan, Cambodia, Liechtenstein, Luxembourg, Monaco, Macao, Martinique, Maldives, Nicaragua, Peru, Pakistan, Paraguay, Reunion, Viet nam, Uruguay, Russian federation.